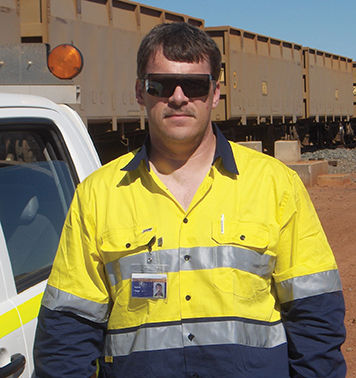 It’s hard to imagine that anyone could love a job in which you are on call 24/7 and have no holidays or weekends off, but Warren Fargo did. He worked as a railway engineer in Buffalo for sixteen years (once working for ninety-three days in a row) before suffering a career-ending back injury.

“Sixteen years down the drain,” he said.

His injury required back surgery, which was successful, but limited his lifting ability.

“I felt that Behrend would be a better fit for me than a trade school, but I was told I had a lot of catching up to do, especially in math, before taking the entrance exam,” he said.

No stranger to hard work, Fargo got tutoring help, passed the exam, and started classes in the fall of 2002, twenty-four hours after leaving his job with the railroad.

As with most things Fargo does, he went all in.

“Over the next three years, I believe I spent every single day, seven days a week, at school,” he said.

He graduated in 2005 with two associate degrees from Penn State: EET from Behrend and Telecommunications Engineering Technology, earned through the Wilkes-Barre campus.

Having never lost his love of locomotives and given his past career experience, he quickly landed a job in the rail industry.

Today, he is a senior field service specialist with New York Air Brake (NYAB) Corporation, where his primary responsibilities are to troubleshoot and resolve locomotive air brake issues. He travels all over the world but spends many of his days working for NYAB at Wabtec in Erie.

“I receive trouble calls from all over the world and have traveled all over the United States and Canada and to South Africa and Australia,” he said. “I get to meet and work with a broad range of people, and it’s a good feeling to know that I can often resolve issues for someone halfway around the world.”

His work also provides a tangible sense of pride.

“When I see a train, I know there’s a good chance the products that I support are on those railcars or on that locomotive,” he said. “I really enjoy what I do, and I’m glad that I decided to go to college and that I stuck with it.”

His advice to older adults considering a return to the classroom: Definitely do it, but don’t follow exactly in his footsteps.

“If I had it to do over again, I would start with just a couple of classes at first, instead of jumping right in with fifteen credits in my first semester. That was really tough.”