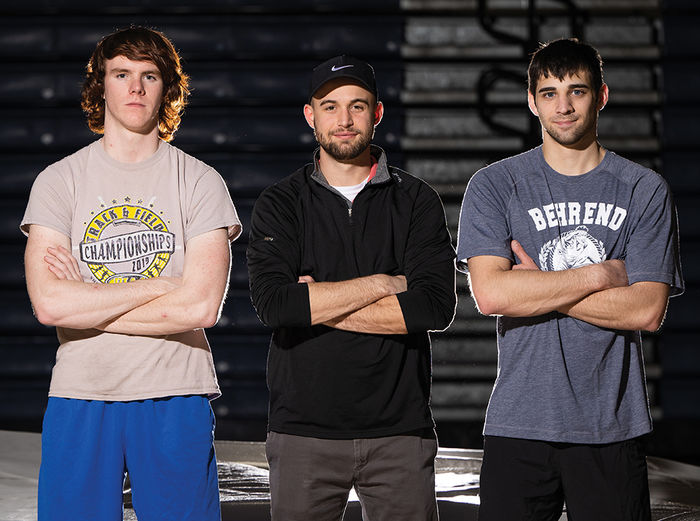 For several years, Brady Smith sailed over high jump bars, setting both personal and school records with little opposition. That changed when Sam Hetrick arrived at Penn State Behrend in 2021 and offered Smith the one thing he’d never had: Serious competition in the high jump event.

“It really pushes you, especially when it’s your teammate because he is at every meet,” said Smith, who graduated in May with a degree in Marketing. “I always had tough competition because of Sam.”

If that sounds like a negative, Smith and Hetrick—and the heights they both recently reached—say otherwise.

“It was really great having Smith here to jump with,” said Hetrick, a New Bethlehem native and sophomore History major. “When I was in high school, I never thought I’d ever be clearing the heights I am now.”

The two finished the indoor track season ranked third (Smith) and fifth (Hetrick) overall in the NCAA Indoor Track Championship, earning All-American honors. They each had a final mark of 2.03 meters.

Greg Cooper, head track and field and cross-country coach, is not surprised by their achievements.

“Some colleges recruit with the hope that the student will replicate their high school success,” Cooper said. “We recruit knowing that when athletes buy in and work hard, the sky is their only limit.”

Gardner was a standout jumper as a Mechanical Engineering major at Behrend. He went to the indoor NCAA Championships and earned Behrend’s first indoor All-American honors.

In 2015, he set a record of 2.07 at the Armory in New York City—a record that Smith and Hetrick broke at the same meet earlier this year with twin 2.08-meter jumps. Hetrick went on to beat that the next weekend, reaching 2.10 meters at Ashland University.

Bittersweet for the previous record holder? A little.

“You’d like to see it stand for a while longer, but I was happy for them, and I’m just glad to be a part of it,” Gardner said. “Sometimes, I feel like more of a fan than a coach.”

Gardner joined the Behrend coaching staff in 2017 to work with the jumpers. There are nine on the team right now who compete in long, triple, or high jump events. Cooper programs the jumpers’ day-to-day training and weight room workouts and leaves the technical jump stuff to Gardner.

“Kevin has been in flight so he has a deep understanding of the sport and what our athletes can do to improve,” Cooper said.

That’s a challenge with Smith and Hetrick, Gardner says. “They are so good at it that it’s hard for me to tell them what to fix,” he said, “especially in a meet setting because they usually already know what went wrong.”

As much as Hetrick and Smith gained from working together, the high jumper ultimately leaps alone.

“In this sport, you can’t rely on a teammate to help you out,” Smith said. “It’s just you and the bar you have to get over.”

As for what makes a good high jumper, Smith boils it down to: Run fast, jump high, and don’t think too much.

“You have to have a goldfish memory,” he said. “When you finish a jump, just forget it, and focus on the next one. The less you think, the better.”

In other words, don’t get in your own head and trust the training. Jumping, Cooper said, takes both mental and physical strength.

“Jumpers have to be fast and maintain speed as they shift from a horizontal to a vertical momentum,” Cooper said. “In addition, they need to be very strong. The weight room is one of our most important training tools. We work on making the jumpers as strong as possible without getting any bigger so they can overcome inertia and defy gravity, briefly.”

It’s a formula that worked for Smith and Hetrick, who set and broke their own—and each other’s—records throughout the track season.

“It’s common in jumping events to keep improving,” Gardner said. “It usually takes a couple of years, but once they really perfect the technique, work out any bad habits, and find their rhythm, jumpers can often keep reaching new heights.”