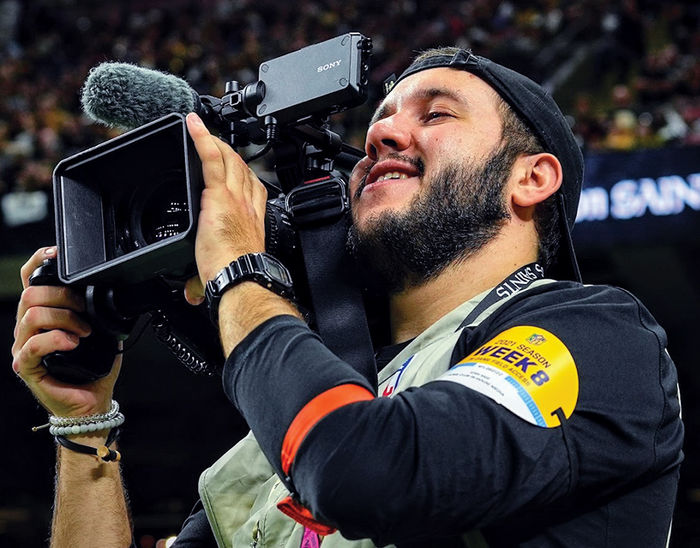 Josh Sige is a videographer and content creator for the New Orleans Saints NFL football team.

“Surreal” is how Josh Sige described one of his first days on the job earlier this year as a videographer and content creator for the New Orleans Saints NFL football team.

“I was standing aroud the Superdome at a home game and I turned, and Sean Payton (former Saints head coach) is standing next to me,” he said. “That’s when I knew I had made it to the big leagues.”

Sige got there fast, having graduated from Behrend in 2021 with a degree in Digital Media, Arts, and Technology. It wasn’t luck. He had worked for it, moving steadily—albeit quickly—up the ranks in the sports world, poised with a camera on a lot of sidelines, from developmental leagues to WNBA (Seattle Storm) to his current position, which also includes working for the New Orleans Pelicans NBA basketball team.

Sige helps create digital content for the social media handles of both teams and also produces video and photo packages and graphics for in-arena viewing. Working for two national teams with overlapping seasons was a baptism by fire for Sige, who has put in as many as seventy hours a week at times.

“It is an insane amount of work for our fifteen-member team, but it’s all worth it when that crowd, 70,000 strong, stands up and cheers for your team after watching the video you created on the scoreboard,” he said. “Although we are not on the court or in the field playing the game, fans are cheering for our work and the show we put on screen for them. It’s really cool.”

Sige feels fortunate to have found his passion early on when he did an internship with the Erie SeaWolves double-A baseball team in Erie. After that, he actively sought opportunities to grow in his field. His determination—and Penn State Behrend connections—opened doors.

Matt Bresee, a 2000 Communications graduate and former president of the Erie BayHawks (D-league basketball) team in Erie, offered Sige a job working on the creative and social team for the BayHawks.

He also credits Rob Frank ’06, lecturer in photography and owner of R. Frank Media in Erie, for guiding and supporting him. “He gave me a world of expertise and knowledge,” he said. “He not only taught me camera skills, but also how to conduct myself as a professional and a person. I wouldn’t be where I am today if not for him.”

Sige is already paying it forward. “One of my proudest moments happened when an intern who was working for me received multiple full-time job offers before his contract had even expired,” he said. “It felt great to play a role in his success in the same way that other people had invested in me and my career.”

Who Is Josh Sige

On living in The Big Easy: “The heat and humidity took getting used to, but it’s a great place full of culture and fun-loving people who are big sports fans. Everyone treats you like an old friend here.”

Best job perks: “Flying around the country with an NBA team on a private jet and watching NFL games from the sidelines.”

Words he lives by: “ ‘The obstacle is the way,’ by Marcus Aurelius.”

In his free time: “I love exploring New Orleans, playing basketball, or just going out and taking photos. I’m also a killer chef.”

Advice for wannabes: “The best way to learn to do this job is to do it. Take any work you can get. Give up your weekends and dollar draft nights with friends. Those sacrifices will pay off later. Take any gig. People will recognize your work ethic and tell others. Do the grunt work now so that you can be the boss later.”