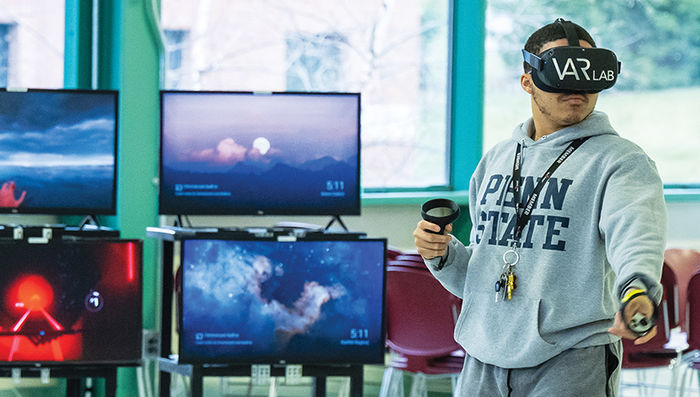 If it weren’t right in front of your eyes, literally and figuratively, it might be hard to see how quickly one good idea can bloom into a world of opportunity.

What started as an effort by Dr. Chris Shelton, assistant professor of clinical psychology, to reduce barriers to accessing mental health support with virtual technology has expanded into a nationally ranked, and very busy, Virtual/Augmented Realty (VAR) Lab at Behrend.

Animation Career Review, an online resource for those aspiring to careers in digital and graphic arts as well as game design and animation, recently placed the virtual and augmented reality programs of Penn State Behrend, offered through the VAR Lab and the Digital Media, Arts, and Technology major, among the top ten on the East Coast. This placed Behrend’s programs among powerhouses like the Massachusetts Institute of Technology, New York University, Rochester Institute of Design, Cornell University, and Harvard University. Among the programs of all the public schools and colleges in the United States, Behrend’s VAR Lab ranked fourteenth.

It’s a welcome, if somewhat astonishing, honor, said Shelton, who leads the VAR Lab and has been shepherding growing activity there over the past three years with the help of considerable grant funding, student research talent, and partnering faculty expertise. Current projects range from smartphone apps to virtual tours of Wintergreen Gorge to immersive history projects for the Hagen History Center in Erie.

Why would a psychologist be involved in virtual and augmented reality, an area many people might associate with engineering? In fact, Shelton explained, some of the earliest work in VR was done by psychology researchers who were trying to help treat combat veterans suffering from post-traumatic stress disorder.

“They used it to do exposure therapy with veterans,” Shelton said. “More recently, though, we are seeing a lot of research suggesting that this type of technology can be quite effective at helping to address a wide variety of mental health issues, including overall wellness and stress management.”

Shelton’s personal interest in virtual technology stems from a desire to overcome obstacles to mental health treatment. “I call them the 4 As: accessibility, availability, affordability, and acceptability,” he said. “Digital mechanisms can help address these issues.”

Case in point: Serene is a mental health resource and mindfulness smartphone app developed by a team of Behrend students. The team launched the app during the pandemic to help users track their emotions and suggest activities and resources that could help with overall wellness. Following the successful launch of Serene, work is now underway, in partnership with the college’s James R. Meehl Innovation Commons ideation lab, on a new app targeting stress and depression in college students.

Most recently, the technology, equipment, and interests of student researchers have led to a variety of projects following Behrend’s Open Lab model of learning, which brings students together with external partners to develop solutions and address challenges.

The VAR Lab has been collaborating with the Hagen History Center in Erie on a variety of immersive exhibits, including the demonstration that accompanies the Oliver Hazard Perry telescope on display at the museum.

On a 55-inch touchscreen monitor, visitors can get an up-close look at the artifact from all angles, zoom in to see the inscription, play an “eye-spy” game that illustrates what it might have been like to spot ships through a telescope in 1813, and dive deep into the history of the Battle of Lake Erie to learn more about the warships and commanders involved.

While Shelton runs the VAR Lab, the work is firmly student-centered, providing opportunities for Behrend students from across the college to experience, research, and implement the technology. Dozens of students are engaged in VAR activities, doing research work or teaching others how to use the technology in a new learning space on campus known as VAR Edu.

VAR Edu features eight active user and five stationary user spaces for students and faculty members to experience immersive technologies, including AR and VR headsets as well as VR-capable PCs, TVs, and more. VAR Edu is open 12 hours a week for drop-in “play” and offers more than 300 titles in its immersive content catalog.

The space will also be used to teach faculty members from across the college how VR technology can be integrated into course curriculum and enhance the learning environment of all students at Behrend, regardless of major.

Future plans for the VAR Lab include further expansion into industry, with students helping to connect external partners with immersive technology solutions. The VAR Lab is already working with U.S. Steel. Plans are also underway for a VAR Studio for 3D modeling and production as well as reality recording.

“The lab has seen immense growth in just three years,” Shelton said. “I’m excited about the future and all of the student-driven endeavors that are already underway or in the planning stages. I do think the best is yet to come.”