Decades of Service Add Up for Accounting Professor 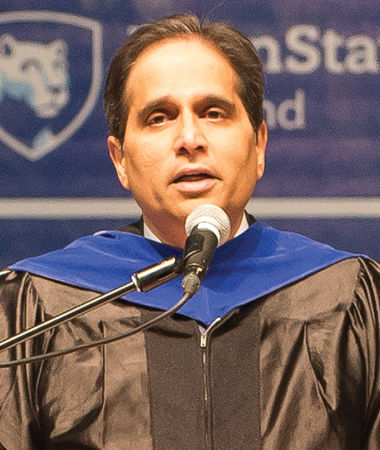 Dr. Ashutosh Deshmukh didn’t plan to be a college professor, but his path has led him to the highest academic rank possible at Penn State: He has been named distinguished professor of accounting and management information systems.

Deshmukh, who grew up in what was then known as Bombay, India, was just 19 years old when he earned his bachelor’s degree in accounting. He worked as an accountant in India before coming to the United States to earn an MBA at the University of Alabama, which is where he got his first taste of teaching.

“As part of my assistantship there, I taught calculus and algebra to undergraduate students,” Deshmukh said. “There, I was also exposed to research in accounting and business. That was when I began to consider a career in academia.”

After earning his MBA, he obtained his Ph.D. from the University of Memphis and joined the faculty at Behrend in 1993.

“I enjoy teaching because it is a multi-faceted activity,” he said “It demands that you be on top of your subject matter, be able to communicate complex issues easily, be able to motivate and energize students, stoke the curiosity of your audience, and, most importantly, give students survival skills to make it in the messy real world.”