“This ranking demonstrates the continued commitment of our faculty and staff to prepare our students to be leaders in engineering,” said Dr. Tim Kurzweg, director of the School of Engineering. “Our unique programs blend traditional academics with research and outreach opportunities that give our students the tools to succeed.”

Kudos to These School of Engineering Alumni 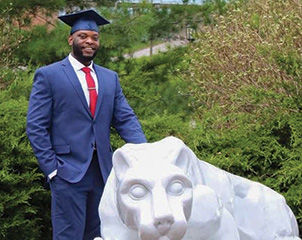 Kevin Josue, a 2018 Electrical and Computer Engineering Technology (ECET) graduate, was featured in Control Engineering magazine as one of their 2020 Engineering Leaders Under 40. Josue, 25, is a field services engineer for Control Station, Inc. in Manchester, Connecticut.

Originally an Electrical Engineering major, Josue made a switch to ECET, which he said was the perfect move for him.

“I can comfortably say now that the ECET program has taught me all the practical skills I needed to succeed, and it gave me the purpose in life I was looking for,”

Josue wrote in an email to one of his favorite professors, David Loker, associate professor of engineering. Josue is still a Penn State student. He’s enrolled in the Master of Engineering Management program online through World Campus.

Derek Krzysiak Breski, a 2014 Electrical Engineering graduate, is a systems engineer with the Planetary Landers team at Astrobotic, a Pittsburgh-based space robotics company that “seeks to make space accessible to the world.” The company develops advanced navigation, operation, and computing systems for spacecraft, and their fleet of lunar landers and rovers deliver payloads to the Moon for companies, governments, universities, non-profits, and individuals. 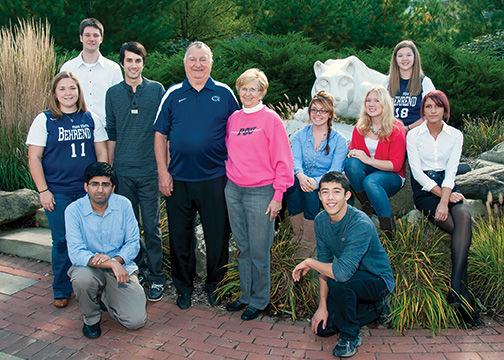 Joe and Isabel Prischak, center, surrounded by several recipients of the scholarships they have endowed at Penn State Behrend.

Erie businessman Joe Prischak, a longtime friend of Penn State Behrend and a community leader who was instrumental in founding the college’s Plastics Engineering Technology program, was recently named to the Plastics Hall of Fame.

Membership in the Hall of Fame is the highest honor the Plastics Industry Association bestows upon an individual.

“Joe Prischak is a pioneer and a visionary who understood from the start how plastics would revolutionize the design and packaging of products we use every day,” said Chancellor Ralph Ford. “His legacy in the plastics industry, in the Erie community, and at Behrend will endure for generations.”

That legacy includes the Plastics Engineering Technology (PLET) program at Behrend, which has produced more than 1,000 graduates since Prischak and Paul “Hoop” Roche, the president of what was then Erie Plastics, approached the college, hoping to expand the pipeline of plastics professionals.

Prischak began his career with Erie Resistor, which owned the second injectionmolding machine in the United States, and then Penn Erie Tool Shop before launching his own business, the Triangle Tool Company, in 1956.

His next company, Plastek, adapted the mold-making process to the emerging field of plastics, producing components for IBM computers and the Schick safety razor. Today, the Plastek Group manufactures packaging for the personal-care, food and beverage, cosmetics, and pharmaceutical industries. The company, which is still based in Erie, has more than 2,500 employees at manufacturing sites in the United States, the United Kingdom, Mexico, and Brazil.

As Plastek grew, Prischak needed more professionally educated engineers. In 1984, he and Roche led a $6 million fundraising campaign, which benefited the PLET program—one of only four such accredited degrees in the United States— and supported facilities expansion at Behrend. The college’s Prischak Building is named in his honor. “Joe Prischak had the vision and insight to position his company at the leading edge of plastics manufacturing,” said Dr. Tim Kurzweg, director of the School of Engineering. “He also knew that to remain there, he would need well-educated, forward-thinking employees. His support of Penn State Behrend has transformed not only the college, but also the manufacturing community in Erie.”

Dr. Charlotte DeVries, assistant professor of mechanical engineering, was named one of Erie’s 40 under 40 by the Erie Reader.

Dr. Alicyn Rhoades, associate professor of engineering in plastics engineering technology, was awarded a Manufacturing and Sterilization for COVID-19 ([email protected] PSU) recognition “for sharing her plastics engineering expertise and her industry connections and network.” Rhoades was quick to thank the PLET team and industry partners for their contributions.

Dr. Paul Lynch, assistant professor of industrial engineering, was recently chosen as one of Behrend’s Best for living the civility values of the college.

Faculty Awards for the 2020-21 Academic Year

From their involvement in the Materials and Manufacturing Group, Behrend students who belong to the club, get two of the most valuable things they can acquire outside of a college classroom—professional contacts and opportunities for hands-on experience.

Even better, many of them are rewarded financially for being club members: Every meeting starts with a rundown of job, internship, and scholarship opportunities by the club’s advisers, Dr. Paul Lynch, assistant professor of industrial engineering, and Shannon Sweeney, associate professor of engineering.

Since the MMG club’s inception five years ago, members have received more than a quarter of a million dollars in scholarships!

“We recently surpassed $250,000 in scholarship funds with 140 awards being awarded to our MMG members,” Lynch said. “Most of these awards have been to Industrial, Mechanical, and Mechanical Engineering Technology majors, but the club is open to students in any discipline.”

With the benefits of membership that the MMG offers students, it’s little wonder the club has grown into one of the largest on campus with nearly 100 members from engineering, business, and science programs.

Clarience Technologies has established an Early Career Professorship at Behrend, where a faculty member will guide four senior design projects in the field of data analytics. The projects will support Clarience’s Road Ready telematics division, which uses wireless sensors to track the location, status, and condition of fleet vehicles and cargo.

The Early Career Professorship expands the company’s relationship with the School of Engineering, which has contributed research and assisted with product development for Clarience’s flagship brand, Truck-Lite, since 2006.

The support and involvement of partner companies such as Clarience Technologies give our students the opportunity to apply what they have learned in the classroom, and to see firsthand the improvements that result from innovation.