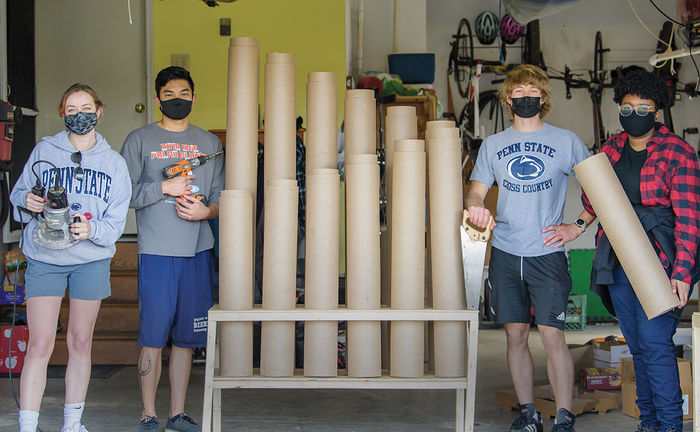 In Behrend’s Youth Education Outreach (YEO) K-12 programs, one person’s trash—paper towel tubes, unused yarn, plastic spoons—is another student’s hands-on engineering project. Participants in YEO programs are often given a bag of random items and challenged to turn them into a vehicle or whirligig or other device.

So, when Onex, an Erie manufacturing company, offered Melanie Ford, director of the college’s YEO programs, a truckload (literally) of sturdy cardboard tubes, she immediately thought about turning them into some sort of musical instrument or sound installation.

Ford reached out to Dr. Joel Hunt, associate teaching professor of music and digital media, arts, and technology, who knew just what to do.

“When I saw the tubes, I was immediately reminded of the Blue Man Group’s performances with a xylophone-like instrument made from PVC pipe,” Hunt said. “The instrument, which is known throughout Australia and Papua New Guinea as a thongophone, consists of a series of tubes of varying lengths, similar to that of a pneumatic pipe organ or pan flute.”

The thongophone player strikes the end of the tube with a rubber clapper to initiate vibrations, which cause the tube to resonate at a frequency that is determined by its given length and diameter.

Hunt and Ford wanted to expand on that idea to make it an interactive installation that employs mechanical beaters and computer-controlled installation.

With the “what and why” of the project determined, they just needed to figure out “who and how.” That was the easy part as every student in the School of Engineering must complete a year-long senior capstone project to graduate.

Hunt and Ford turned the idea into a project for students “to design and build a towering music installation that consists of a mechanical player thongophone that can play music from a MIDI file like a modern digital player piano and a smaller manual thongophone that can be played by anyone passing by.”

Team “Phonies”—an interdisciplinary group of Computer Engineering (CE) seniors Alex Croll and Deaja Vital and Electrical Engineering (EE) seniors Jake Lehotsky and Mackenzie Sloan—have not only the engineering knowledge to tackle the project, but the musical background as well; three of the four are musicians.

Croll has been playing percussion since he was in the sixth grade; Sloan plays the piano, flute, and ukulele; and Lehotsky plays the guitar and harmonica and has designed electronic instruments before.

“Being musicians gives us knowledge of what good sound should be and has helped immensely with some aspects of the project, like picking the right material for the pipe drumheads,” Croll said. “Having had experience making music, we know what things to be picky about and what things won’t have much impact on the thongophone’s final sound.”

Most senior capstone teams consist of students in the same major, but Team Phonies say having two CE and two EE majors on the project has been beneficial.

“Our majors are different, but closely related,” Vital said. “Computer engineering is a branch of electrical engineering mixed with some computer science.”

“I was happy to have Mackenzie and Jake on our team as I knew this project would take quite a bit of wiring and analog circuitry, which I’m certain they are better at than me,” Croll said. “And, it’s allowed Deaja and me to focus on the computer aspects of the project rather than having to juggle both the programming and making sure none of the circuits set the thongophone on fire.”

Lesson No. 1 in their effort to hand-build a product from scratch was finding a starting point, Croll said.

“From our first meeting in October, the enormity of this project has been clear,” he said. “Our project was fresh with no previous information or schedules to work from. You might think having lots of leeway is good, but it was nerve-wracking. That said, we didn’t waste any time getting started because we knew we wouldn’t have any time to waste, no corners to cut, and there was no backing down.”

An unexpected team strength has been Lehotsky’s extensive background in woodworking and access to tools and a workspace at his home in Erie for the team to meet and build the instrument. YEO is already developing hands-on activities utilizing it.

For Lehotsky, the project brought to light the joy (and sometimes frustration) of engineering.

“Every time we brainstormed one engineering problem, another would arise,” he said. “How do you support forty-eight six-inch diameter cardboard tubes ranging from ten inches to ten feet? Build four separate chassis. How do you communicate notes between chassis? Run a USB cable. How do you parse a serial transmission from a USB cable? Place a separate computer in each chassis. And so on and so on. It’s pure engineering. This is what we live for.”

A second team—Electrical and Computer Engineering Technology seniors Arielle Alfonso, Darren Brigham, and Ryan Seltzer—are also building a thongophone. Each team approached the project in their own way. Brigham reports: “Our team used thirtysix tubes cut to various lengths that correspond to specific notes. Solenoids are electromagnetic devices that will shoot out a small metal plunger when given voltage. These solenoids will be connected to a programmable microcontroller, which we will upload various songs to, and have mounted above the tubes. Thus, it will be a self-playing thongophone!”