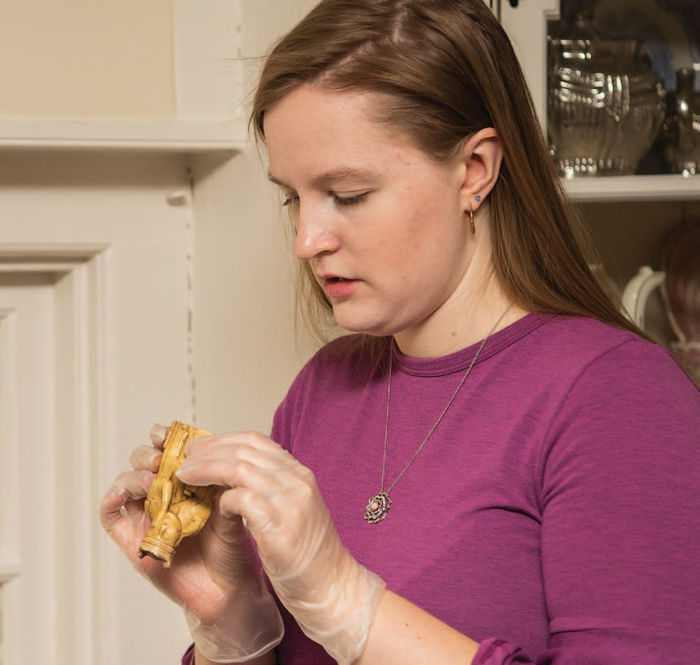 Aurora Paterson has been accepted into graduate school at the University of Sussex in England where she plans to earn a master’s degree in art history and museum curating.

One day, Rhonda Steg, then executive assistant to Penn State Behrend Chancellor Ralph Ford, was leafing through Archaeology magazine when a story about the Lewis Chessmen caught her eye. The distinctive 12th century chess pieces, carved from walrus ivory and whale teeth, looked familiar. They bore a striking resemblance to the bulging-eyed figurine heirlooms on display in Glenhill Farmhouse, home to an eclectic array of antique items left behind by Mary Behrend when she donated her farmhouse and property to Penn State in 1948 for the establishment of the Behrend campus.

Ford asked reference and instructional librarian, Jane Ingold, who is also the college’s archivist, if she had any information on the pieces. Ingold turned to Dr. Leigh-Ann Bedal, associate professor of anthropology, who knew the right student to help.

Aurora Paterson is a senior History major with a passion for British history.

“I had taken an Egyptian civilization class with Dr. Bedal, and she knew I was fascinated by British history,” Paterson said. “The Lewis Chessmen hoard was discovered in 1831 on Lewis, one of the western isles of Scotland. Most of the seventy-eight pieces that were found are on display at the British Museum in London.”

Bedal suggested Paterson research the history of the Glenhill chess pieces as an independent study project. As soon as she laid a gloved hand on one of the eleven pieces in the farmhouse, she knew they were not Lewis Chessmen.

“All of the Behrend pieces had something that denoted they were not originals, whether it was obvious seams, bubbling, or areas of the carving that were missing because the mold didn’t fill completely,” Paterson said. “It was pretty clear that they were mass-produced reproductions.” Paterson points out that the pieces, estimated to be late 19th century Victorian reproductions, still have value and historical significance.

“Altogether, the Glenhill Farmhouse’s pieces are worth several hundred dollars,” she said. “They are made using electroforming, in which stearin, plaster, resin, or wax was poured into molds.”

Paterson theorizes that Mary Behrend’s husband, Ernst, would have found the chessmen interesting for that fact alone.

“He had a master’s degree in engineering and probably would have liked the way that they were manufactured,” she said. “Electroforming was revolutionary at the time that it was developed because the use of molds allowed for mass production of artifacts without damaging the original.”

One mystery that is likely to never be solved is how the Behrend chess pieces came to inhabit the farmhouse.

“The Behrends traveled extensively and they had a wide variety of global contacts,” Paterson said. “It’s likely someone gave the pieces to Ernst or maybe he found them in a shop somewhere. That is something we will probably never know.”