Raise a Toast to Lake Erie 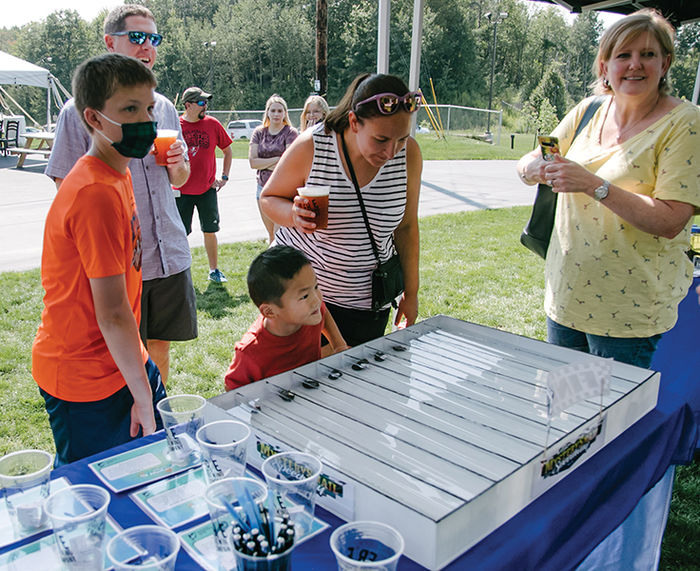 Four beers are planned in the aquatic invasive species series. Each brew is released with a public launch party at Erie Brewing Company in Knowledge Park, where visitors over 21 can try the new beer and all ages can learn about the aquatic invader it is named for.

On a sunny summer day at Erie Brewing in Penn State Behrend’s Knowledge Park, a half-dozen fans are lined up in front of the Mysterysnail Speedway, a four-foot plastic box with plexiglass dividers creating race lanes for a field of ten large snails. They place their “bets” and cheer for their chosen snail, each marked with a race number on its shell.

As the oversized gastropod invad­ers make their way to the finish line, Dr. Lynne Beaty, assistant professor of biology at Penn State Behrend, explains why we don’t want them in our waterways.

“Mysterysnails are so named because females produce young, fully developed snails that ’mysteriously‘ appear. They’re a group of invasive species that originate in Asia but have found their way to Lake Erie,” Beaty said. “They compete with native species, alter nutrient ratios, and transmit parasites to wildlife.”

Aquatic invasive species (AIS) are non-native plants, animals, or pathogens that harm the environ­ment, the economy, and human and animal health. They are one of the greatest threats to biodiversity, and they can spread easily through unwitting human assistance and connected waterways.

Beaty and two other Biology faculty members, assistant teaching profes­sor Dr. Adam Simpson and assistant professor Dr. Sam Nutile, have been working with Kristen McAuley, lecturer in marketing, and Sara Stahlman, extension leader for Pennsylvania Sea Grant, to raise awareness about invasive snails (and other species) in the waters around the Erie region. Last summer, the team came up with a novel idea to reach adults: craft beer.

“Good beer needs high-quality, clean water, and invasive species threaten our freshwater supply,” Beaty said. “So, we thought a collaboration with Erie Brewing was a great way to promote AIS awareness because

controlling invasive species can help improve water quality. We were thinking too that this might be an excellent way to reach adult audiences who may acciden­tally transfer AIS when they move boats to different water bodies.”

The group met with Erie Brewing’s brewmaster, Tate Warren, who was on board with creating a draft series of special AIS-themed brews for invasive species awareness.

The first, Mysterysnail Ale, “an amber ale loaded with flavors of bread, biscuit, and caramel malt,” debuted at a launch party, complete with the mysterysnail racing, at Erie Brewing. Visitors had the opportunity to try a new brew and learn about many AIS at tables staffed by Behrend School of Science faculty members and staff members from Sea Grant, a research, education, and outreach program administered by the college.

The second beer in the series was released in December. Round Goby Rye was inspired by the invasive round goby, a small but aggressive bottom-dwelling fish that affects Great Lakes food webs by outcompeting native species and feeding on their eggs and young.

Two more brews are planned in the AIS series: a Zebra Mussel Malt, and a Hazy Hydrilla.

Each of the beers will be debuted at a public launch party to raise awareness of the AIS that the brew is meant to thwart.

For each of the beers, a promotional poster not only advertises the beer and its distinct flavor, but also gives facts about the highlighted species. QR codes on the posters lead users to more information about the featured AIS.