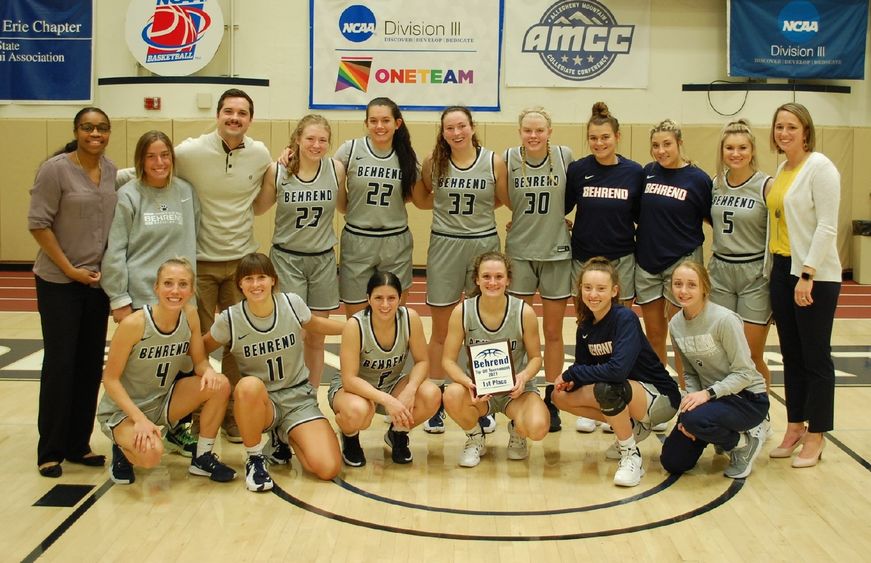 The Penn State Behrend women’s basketball team won the Tip-Off Tournament with an 85-65 victory over Grove City. Kara Haslett, a senior from Baden, finished the weekend with 36 points, 13 rebounds, five assists and four steals. She was named Tournament MVP.

The Lions exited the Eastern College Athletic Conference tournament with a loss to Rutgers-Newark in the semifinals. Goalkeeper Sam York, a junior from Akron, Ohio, made a career-high 12 saves.

The goal by Wesleyan in the NCAA Division III Tournament was the first point scored on the Lions in 11 games. Behrend ends its season with a 19-2 record.

PJ Gourley, a senior from Butler, led the Lions with 25 points against Thiel. RJ Marsh, a junior from State College, had a career-high 10 rebounds against Waynesburg.

Caitlin Carnuche, a senior from New Castle, scored 25 points – including five three-pointers – against Grove City. She was named to the All-Tournament Team.

Phoenix Myers, a senior from Erie, led the Lions at the NCAA Division III Regionals, hosted by SUNY Geneseo. He finished the 8K race in 26:03.4, placing 24th in a field of 158 runners.

Olivia Nola, a freshman from Erie, led the Lions at the NCAA Division III Regionals, hosted by SUNY Geneseo. She finished the 6K race in 24:51.9, placing 44th in a field of 141 runners.

The Lions exited the NCAA Division III Regionals with a loss to fifth-ranked Calvin. The team ends the season with a 22-6 record.

Joe Newara, a senior from Harborcreek, pinned his first two opponents at the Washington & Jefferson Invitational. Newara, a heavyweight, lost in double-overtime in the match for sixth place.

The team competed at the La Roche Invitational. All matches were in the Baker format.