Penn State Behrend is replacing Erie Hall, the college’s original gymnasium, to create a new fitness, recreation and wellness center. The $28.2 million project, which began in September 2021, is being funded in part by Behrend students, who will contribute nearly 40 percent of the project’s cost, using money from the Student Initiated Fee.

Erie Hall was the first building to be added to Ernst and Mary Behrend’s original Glenhill Farm estate. When the building opened, in 1952, Behrend did not yet offer four-year degrees.

The original Erie Hall doubled as a dance hall, with music by 15-piece bands. Former President Bill Clinton spoke there during the 2016 presidential election campaign.

The new, 52,700-square-foot building will nearly triple the size of Erie Hall. It will include a three-court gymnasium, training rooms, and support space for the college’s NCAA athletics teams. The new building also will provide additional fitness and recreation space and expand the college’s wellness programs: The Personal Counseling office will use the new space to offer workshops related to anxiety reduction, stress management, nutrition, and healthy-living strategies, among other health-related topics.

A camera near the construction site is providing real-time images and time-lapse videos of the project: 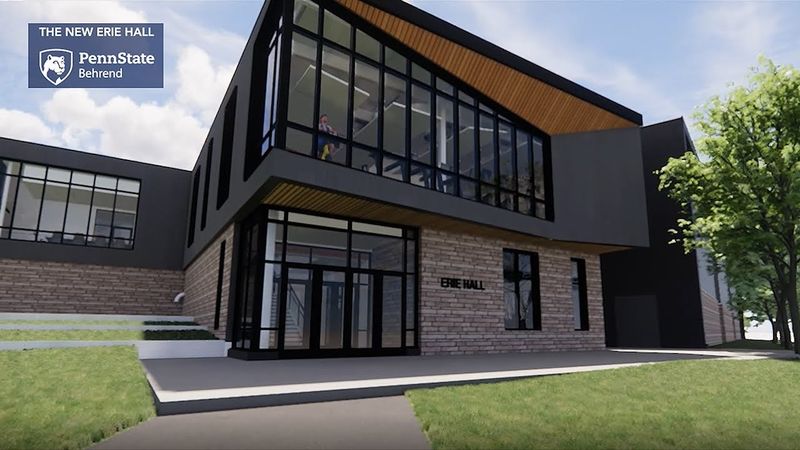 Penn State Behrend is replacing Erie Hall with a new, $28.2 million fitness, recreation, and wellness center. This video animation by Sasaki Associates and Weber Murphy Fox offers a preview of the new building, which should be completed in early 2023.