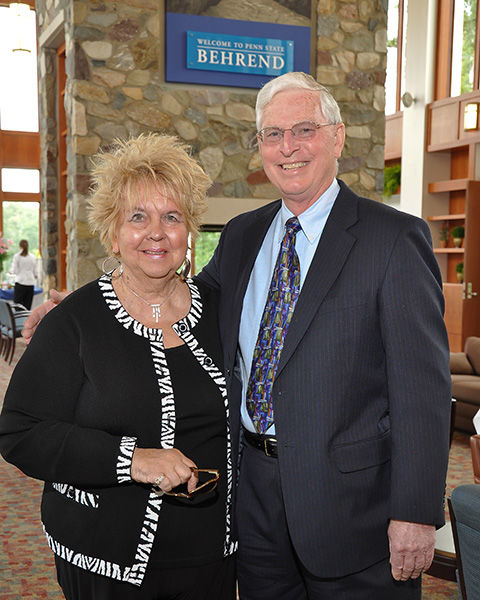 The 2012 Penn State University Board of Trustees Distinguished Alumni Award was given to Robert D. Metzgar for his business acumen and his leadership service both to Penn State and to Penn State Erie, The Behrend College.

Bob Metzgar is the quintessential self- made man. He was born in the two-house Allegheny National Forest town of De Young, Pa., where his family lived without running water and indoor plumbing before moving to the Warren area. Growing up, he delivered newspapers and at age 14 went to work in a china factory, hitchhiking daily from high school to his job.

Metzgar was the first in his family and the only one in his generation to graduate from college, arriving in State College in 1955, the University’s centennial year. Admitting that he “didn’t know how to study,” he dropped out after one semester and then transferred to Penn State Erie, The Behrend College, for two years before finishing his bachelor’s degree in business administration at University Park.

After graduation, Metzgar soon fulfilled a childhood dream by becoming a plant manager, but he realized he wanted to be his own boss. “Even though I had progressed rapidly, I had found out that corporate America wasn’t where I wanted to end up,” he said. “You’re held accountable for everything that happens in corporate America, but in most cases you’re not given the authority to make decisions at the local level.”

Metzgar wanted to make his own decisions. Sitting down with the local phone book, he made a list of companies he might buy and settled on Warren’s North Penn Pipe & Supply, Inc., where he had worked for two summers during college. Metzgar bought the company in 1978 with no money down and paid off his loan in five years. By the time he retired as president and CEO 30 years later, Metzgar had grown the wholesale supply company to
$45 million in annual sales.

In 1995, Metzgar was appointed by then- Gov. Tom Ridge to the Penn State Board of Trustees. Later, he was elected to three terms as a business and industry trustee. His final term ended June 30, 2009, and he was named a trustee emeritus. During his 14 years on the board, Metzgar served on and chaired the Committee on Finance and Physical Plant, as well as two sub- committees: Audit and Architect/Engineer Selection.

“One of my fortés has been that I have a gift of being able to visualize things,” he said. “I do feel that I made an impact in preserving the character of the architectural feeling and landscape of the campuses.”

During the time Metzgar served on these committees, the University Park campus saw the construction of such landmarks as the Information Sciences and Technology Building, Eastview Terrace residence halls, and the Chemistry and Life Sciences buildings and the connecting Shortlidge Mall.

Closer to his Warren, Pa., home, Metzgar is a member of the Penn State Behrend Council of Fellows, a group of community and business leaders who advise administrators on issues related to campus development and regional need. In 1996, he was named a Penn State Behrend Alumni Fellow.

Metzgar and his wife, Sally, partnered with the University to build Penn State Behrend’s Robert and Sally Metzgar Admissions and Alumni Center, which opened in 2010. At the Metzgars’ request, Penn State architecture students were included in the design process. As part of their assignment, students created sketches based on the project’s actual parameters. Some of their proposed elements are reflected in the final facility.

The Metzgars’ daughter, son, and eldest grandson are Penn State alumni, while their younger grandson, who graduates from high school this spring, has been attending Penn State Behrend full-time for the past two years as part of a dual-enrollment program. Metzgar and his wife are life members of the Penn State Alumni Association.