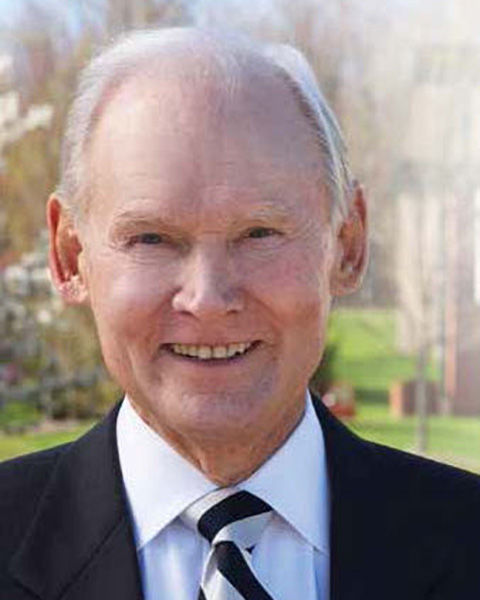 The 2011 Penn State University Board of Trustees Distinguished Alumni Award was given to Edward P. Junker III for his leadership service at Penn State and his commitment to Penn State Erie, The Behrend College.

It took a call from Coach Joe Paterno to reconnect Ted Junker to Penn State. He had been actively involved at Penn State Erie, The Behrend College, since moving to Erie in1964, but hadn’t really been connected with Penn State on a larger scale, other than attending football games at University Park.

When Coach Paterno asked Junker, a former football end, to serve on the first Nittany Lion Club Council in the 1980s, it began Junker's long tenure of leadership service with Penn State. He soon became involved on Alumni Council (1982–1986), serving on the Executive Committee from 1983 to 1986, and from there, he joined the Board of Trustees in 1986 as a business and industry trustee.

During his time as a trustee (1986–2010), Junker saw many issues come before the board and served on numerous committees. But he says no role was more important than serving on the selection committees for two University presidents—Joab Thomas and Graham Spanier.

“The most important job that a trustee has is to hire a great president and then get out of his way and let him do his job,” Junker said.

In addition, Junker has served on the executive committee for three Penn State campaigns, including the current campaign For the Future: A Campaign for Penn State Students. Junker has a deep commitment to these campaigns and to philanthropy in higher education.

That commitment began more than four decades ago when Penn State Behrend administrators approached him after he joined Marine Bank in Erie. Since Penn State Behrend was fairly new, the administrators were looking for help garnering community support, Junker served in an advisory role helping with that outreach. “I have a strong belief that higher education is a strong engine for economic development,” said Junker.

Junker helped with another form of community outreach in 2001, when he partnered with Penn State Behrend on a new athletics and recreation facility, named for Junker and his family. The Junker Center is used for both intercollegiate athletics and community-wide events.

“I wanted to support Penn State, and I wanted to do something that would benefit the community,” said Junker. “It’s in use all the time for the community. It’s very pleasing to see.”

Junker is also on the board of directors and has chaired both the Penn State Milton S. Hershey Medical Center and the Penn State Behrend Council of Fellows. In 2006, Junker was asked to represent Penn State as its nominee for the Big Ten Network’s board—only representatives from two Big Ten schools would be selected to sit on the five-person board.

“I didn’t have a résumé that I thought would be attractive and I had no television experience,” Junker said. It was his expertise in the financial world that made him stand out among the other nominees and receive one of the two spots. He has served as a Big Ten representative since.

At Penn State, Junker has received many awards for his service—among them the Philip Philip Mitchell Alumni Service Award (1987), the Alumni Fellow Award (1987), the Significant Sig Medal (1989), and Penn State’s Fundraising Volunteer of the Year (2007).

Beyond Penn State, he has served on the board of directors for many businesses and organizations including PNC Financial Corp., and Marine Bank. Junker was honored with the Alexis de Tocqueville Society Award from the United Way of Erie County in1994, named a Distinguished Pennsylvanian by Gannon University in 1995, and named “Man of the Year” in1997 by Chautauqua Lake Erie magazine.

Junker is a Penn State Trustee Emeritus and a life member of the Alumni Association.