The Black School of Business has added ten Bloomberg Terminal subscriptions to its finance lab in Burke Center. The Bloomberg Terminal provides real-time and historical financial data, analytics, and market news for every class of assets.

An eleventh new terminal has been installed in Trippe Hall, the college’s newest residence hall. That brings the total number of terminals at the college to twelve.

“In terms of business data, Bloomberg is the gold standard,” said Dr. Greg Filbeck, director of the Black School of Business. “There is no more comprehensive
database of news, market data, and financial information.”

Bloomberg was founded in 1981, creating an electronic network long before investors had access to the internet and 24-hour financial news networks. The platform integrates real-time data and research in every market and asset class, from fixed income to equities, commodities, and derivatives. Bloomberg’s color-coded keyboard allows users to quickly complete common actions. Penn State Behrend was the first college in the region to have a Bloomberg Terminal. “It was being used constantly,” Filbeck said. “People were coming in at all hours, including late in the evenings, to have access to it.”

The new terminals will improve student access to the Bloomberg network: Faculty members will now be able incorporate Bloomberg data in their in class teaching. Students also can earn a Bloomberg Market Concepts certification by completing an e-learning course.

Behrend’s plastics engineering technology program has the largest academic plastics processing lab in the country and has produced its share of impressive projects. The latest work, undertaken in collaboration with the college’s Arts Administration program, might take the cake: a public art project.

The Behrend project is unique in how it achieved the cross-disciplinary mission of the Campus Arts Initiative. Arts Administration students assisted with the selection of the artist and helped document and promote the project, while Plastics Engineering Technology students and faculty members worked alongside the artist to fabricate the plastic discs. 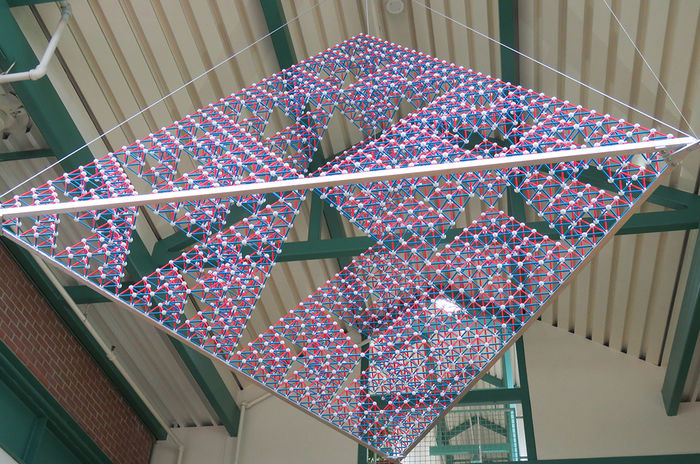 The art of science

Science and the arts might seem to be very different disciplines, but the scientific method and the creative process have a lot in common; inquiry is at the heart of each.

“People sometimes think science is about memorizing facts, but it’s really about making discoveries and wringing answers out of nature,” said Dr. Pam Silver, associate dean for academic affairs and professor of biology at Penn State Behrend. “When you have a scientific question, it takes a lot of creativity to find the answer to it.”

Scientists are, by nature, creative individuals, and the School of Science recently added two works of art that illustrate that.

A colorful quilt, titled “A Way of Knowing,” was created by Silver and hangs in Hammermill Hall.

Furthermore, the underlying geometric design “symbolizes that the building blocks of science are not individual disciplines, but the discoveries to be made by merging diverse ideas, points of view, and approaches to form a strong and unified way of knowing with the goals of wisdom and the power to enact that wisdom,” Silver said.

High overhead at the entrance to Roche Hall is another work of art—a stage-5 Sierpinski tetrahedron that models a fractal with infinite triangles—created by student members of the School of Science Math Club under the direction of club president Thomas Galvin and Dr. Joe Previte, associate professor of mathematics.

“A fractal is a self-similar structure with recurring patterns at progressively smaller scales,” Previte said. “Fractals are useful in modeling natural structures such as plants, coastlines, or snowflakes.”

Some natural objects appear to be completely random in shape, but there is an underlying pattern that determines how these shapes are formed and what they will look like, according to Previte. Mathematics can help us to better understand the shapes of natural objects, with applications in medicine, biology, geology, and meteorology. 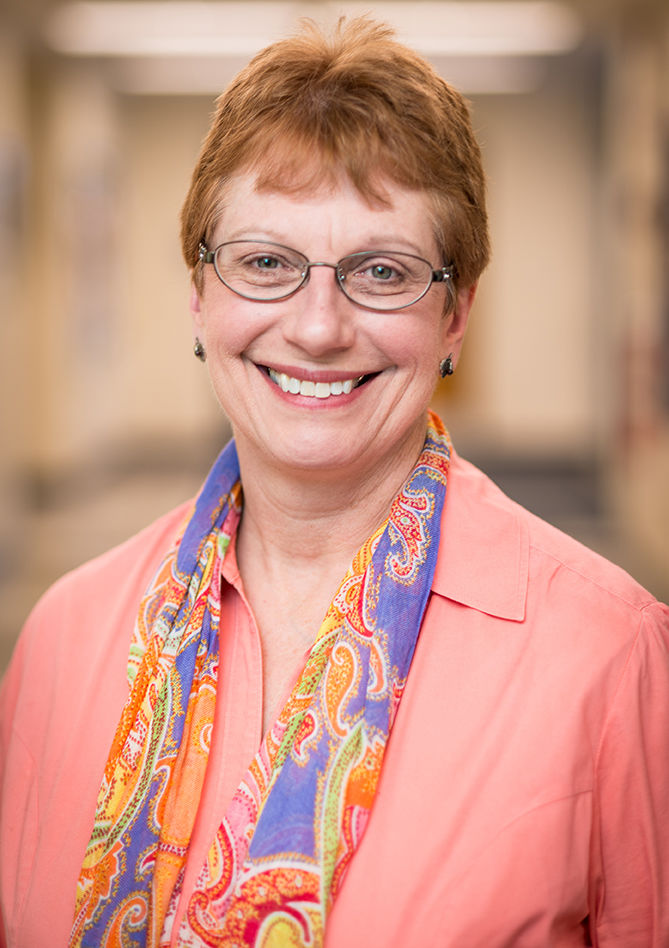 Dr. Priscilla Hamilton, a U.S. Army colonel (retired), received plenty of awards during her three decades of military service, but an honor this fall from Penn State left her “tremendously honored and humbled.” Hamilton, ’78, was named one of sixteen Penn State Alumni Fellows for 2019.

The lifelong title of Alumni Fellow is the highest award given by the Penn State Alumni Association. It’s a perfect fit for Hamilton, whose connection to Penn State has indeed been lifelong.

Her parents were Penn State alumni, and her father was an instructor in the former Continuing Education program at Penn State Behrend. Her grandfather, a Ukrainian immigrant and coal miner in central Pennsylvania, was a longtime Penn State supporter. Hamilton’s own Penn State experience reflects her family’s
emphasis on the importance of education.

Hamilton, who grew up in Erie County, attended Penn State Behrend for two years before graduating from University Park with a bachelor’s degree in science. She earned a doctoral degree in dental medicine from the University of Pittsburgh, and later received several master’s degrees. Her family’s experience—her father was a Navy veteran—also influenced her decision to join the military, which culminated in her role as the commander of DENCOM, the Army’s dental
care system.

Now, having retired after a thirty-three-year career that included U.S. army Legion of Merit, Bronze Star, and Meritorious Service awards, Hamilton is giving back to the Penn State community. In 2018, she established the Priscilla Hamilton Open Doors Scholarship at Behrend. For Hamilton, the Open Doors program—which
at the time came with a two-to-one match from the university—was an opportunity to help students who might otherwise not be able to afford college to find a path to higher education.

She’s also giving back in terms of her time: She has taken on an active role on Behrend’s Council of Fellows, including on the Development Committee, and she brings her unique life experiences to the council’s board of directors.

“I hope I bring some temperance, and no silo thinking” to the Council, Hamilton said. “There’s a wider world, and perhaps a little different way of thinking about something.”

Hamilton is coming full circle, helping to shape the future of an institution that was so formative in her own life: She started her military career by helping to establish the ROTC program at Behrend, and later became the University’s first female cadet brigade commander. She received a strong educational foundation from the “nurturing environment” at Behrend. And she developed lifelong ties with her fellow students—particularly through ROTC.

“I’m sure the folks who graduated from Ohio State University and from Alabama and from Auburn or wherever feel the same way about their school,” Hamilton said, “but being a Penn State alum is a pretty special thing.”

Yahn began her career as a commercial artist, working for the Trask department store in downtown Erie and later for the Boston Store, where her drawings regularly appeared in newspaper advertisements for the store’s clothes.

She and her husband, Walter Yahn, were married for 66 years. They raised four children together.

In the 1960s, as president of the Junior League of Erie, Yahn raised funds for the construction of the Erie planetarium. The astronomy theater was moved to Penn State Behrend in 2014 and expanded with support from the Yahns. It was renamed to honor the Yahn family.

In the 1980s, Yahn opened Interiors of Erie, which provided materials and consultation for residential and commercial properties and projects. In her free time, she continued to paint, often in watercolor. One of her paintings is on permanent display in the Lilley Library gallery at Behrend.

Hilbert was also the former chairman of the board of Reddog Industries in Erie. He was a member of Penn State Behrend’s Council of Fellows and was actively involved in the Erie business community, including serving on the boards of Saint Vincent Health Center and The Erie Community Foundation.

In 2000, Hilbert and his wife, Martha, created the William M. and Martha M. Hilbert Family Scholarship Endowment, and the couple also supported the Reddog Industries, Inc. Scholarship Endowment at Behrend. To date, the funds have generated more than $200,000 in scholarship awards to Behrend students.

The Hilberts also have been longtime advocates of the Young People’s Chorus of Erie (YPC), an outreach program of the college’s School of Humanities and Social Sciences. Since 2009, when YPC was established, the Hilberts’ philanthropic support has provided tuition assistance to students participating in the program and also funded uniforms, sheet music, instruments, and other supplies.

Mark your calendar now and join us for a full weekend of family fun, Behrend-style, at Parents, Families & Alumni Weekend on October 2-4, 2020!

A celebration for young and old alike, it offers plenty of things to do for students, alumni, parents, brothers and sisters, extended family—everyone! There is a lot to celebrate at Penn State Behrend: a beautiful campus, talented faculty who foster academic excellence, a wide variety of extracurricular activities, the opportunity to develop close, lasting friendships, and much more.

Visit behrend.psu.edu/weekend and click on the event link for more information!