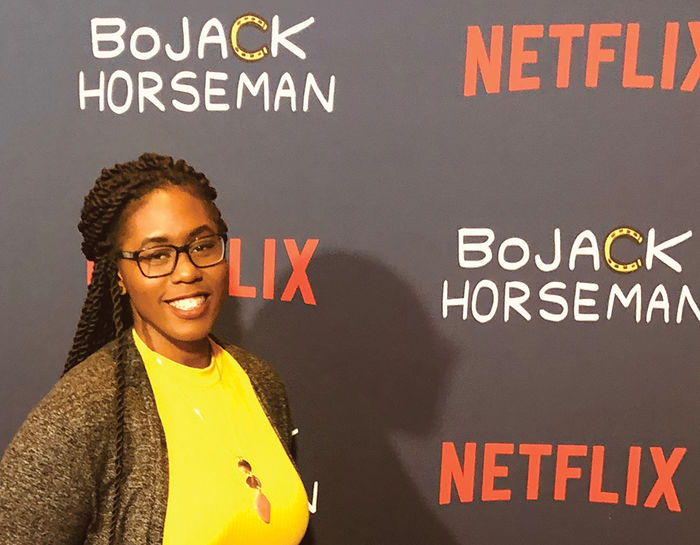 Chikodili Agwuna landed a full-time job as a showrunner’s assistant on BoJack Horseman, an adult animated comedy-drama on Netflix.

Chikodili Agwuna wanted to be a writer from the time she was in elementary school, but it was in a fiction writing class at Penn State Behrend that she learned what kind of writer she wanted to be.

“I had written a short story about a very sad topic, but the writing was pretty funny,” said Agwuna, a 2015 Creative Writing alumna. “My classmates talked about how visual it was, and I realized that whenever I wrote a story, I’d imagine it as a movie. That’s when I decided to make screenwriting my goal.”

She started reading scripts and watching shows, taking note of how stories evolved from page to screen. Two favorites: Game of Thrones and Brooklyn Nine-Nine.

“Game of Thrones really helped me understand how to write action scenes in a way that made it easy to visualize and Brooklyn Nine-Nine helped me learn how to structure a comedic script,” she said.

A writing credit on a 2021 episode of the Netflix animated comedy series Tuca & Bertie made it clear Agwuna had achieved what she set out to do.

“That was a special accomplishment for me because I’m not a staff writer yet,” she said. “I love that show and everyone who works on it. It was a dream to get a co-write with Shauna McGarry in season two and to write on my own for the upcoming third season.”

Agwuna stands out. She always has. She was an active and well-known student at Behrend, and former professors remember her well.

“She always had a great sense of character and a good ear for dialogue,” said Dr. Tom Noyes, professor of creative writing and English, who directed Agwuna’s senior thesis. “I think sometimes people think of writers as reserved and introverted. This is not Chik! She was active in many campus clubs and organizations and has a wonderful, warm sense of humor.”

Agwuna has a gift for befriending people. It’s been an asset for her.

“The film industry is very relationship-based, so when I moved to Los Angeles after graduation, I knew I’d have to put myself out there and make friends right away because I had absolutely no industry contacts,” she said.

In L.A., she enrolled in Loyola Marymount University’s Writing for the Screen graduate program. She soon scored her first gig as a production assistant on a pilot, thanks to her former Behrend roommate, Vee Butler, who had a friend in the business.

“Honestly, every job since then I have gotten through some connection I made when I first moved to L.A.,” she said. During her final semester of grad school, she landed a full-time job as a showrunner’s assistant on BoJack Horseman, an adult animated comedy-drama on Netflix. “One of my roommates at Behrend—Christina Ngo—started watching BoJack in our senior year, and I watched it with her and fell in love with it,” she said. She was the first person I told when I got the job. I think that show really changed the adult animation landscape. It didn’t get nearly the accolades or awards it deserved.”

From showrunner’s assistant, she progressed to writer’s assistant to script coordinator, working on a variety of shows along the way. (See sidebar for list.)

“Usually, you might progress all the way up to script coordinator on one show,” she said, “but with the shorter seasons and runs of shows today, a lot of people at my level end up jumping from show to show.”

Agwuna just landed a job as a staff writer on Criminal Minds. She’d also like to get back on stage herself.

“I won a comedy standup competition a few years ago,” she said. “I was struggling with my mental health and trying to write comedy, and I had fallen into a slump. I entered that competition and spent seven minutes being open and honest about depression and anxiety and how they were currently affecting me. I realize that doesn’t sound very hilarious, but in allowing myself to be vulnerable, I found the funny side again, and I killed on stage.”

Turning tragedy into comedy, words into pictures, acquaintances into coworkers, Agwuna is not only a talented writer, but a master at transforming opportunity into achievements.

On her name: “My parents are Nigerian immigrants. Chikodili is Igbo and means ‘in God’s hands.’ It was tough having a unique name growing up, but by the time I got to college, it was a conversation starter.”

What she writes: “Mostly comedies with a few action movie exceptions. Outside of screenwriting, I write short stories and some poetry, but those may never see the light of day.”

Shows she has worked on: BoJack Horseman, Tuca & Bertie, Criminal Minds, Bust Down, A League of Their Own, Yellow.

Best job perk: “A free lunch. The bigger the show, the more food they have. When I was on Criminal Minds the first time, I never bought groceries because I ate all of my meals on set.”

Delayed gratification: “It takes a long time for a show or movie to be made. By the time a show I’ve worked on airs, I have often already completed another season on a different show.”

On conciseness: “You have to write visually, but without as many words as a book. When I started, it felt so limiting because I was used to going on and on to describe a setting in my stories. Eventually, I learned to be just as descriptive with fewer words.”

On team writing: “The best thing about being on a team is that if we’re stuck on a scene or a plot point, we can talk it out and help one another find a path forward. I’ve laughed, cried, and danced in writers’ rooms.”

What she wishes for students today: “Get to know people who aren’t like you. Education doesn’t just happen in the classroom, but at events, in Bruno’s, and all over campus. Get out of your comfort zone, and you’ll learn a lot.”

On returning to Behrend: “Maybe one day I’ll get a call from the Lion Entertainment Board to do a Friday night standup set. Those were some of my favorite events at Behrend.”