The Penn State Behrend Political Science Advisory Board formed in 2009 and consists of prominent community leaders and alumni. The Board meets twice a year with faculty and current students to discuss community support and publicity for political science program teaching and research initiatives and events, career and internship opportunities for political science majors, and public engagement for faculty members and students with the community.

Timothy Bevevino is an attorney and partner with the law firm of Swanson, Bevevino and Gilford, P.C. in Warren, Pennsylvania, concentrating his practice in the areas of municipal and business law. Mr. Bevevino received his bachelor's degree in Political Science from Penn State Behrend and his J.D. from The University of Pittsburgh. Mr. Bevevino also has served as an instructor for the Jamestown Community College in New York, teaching courses in business law and the judicial system.

Christopher P. Mong is the former Director of Economic and Community Development for the city of Erie and a life-long resident of Erie who always has been active in civic and political affairs within the community. He holds a bachelor's degree in Political Science from Penn State Behrend with post-graduate work in communications at Edinboro University. He and his wife, Christine, have four children. Mr. Mong brings a wealth of political experience to the advisory board. Under long-time Erie Mayor Louis J. Tullio and his successor Mayor Joyce Savocchio, Mr. Mong served twelve years in various local government positions. He also served for six years as the Northwest Pennsylvania Regional Director for Community and Economic Development for Governor Edward G. Rendell. 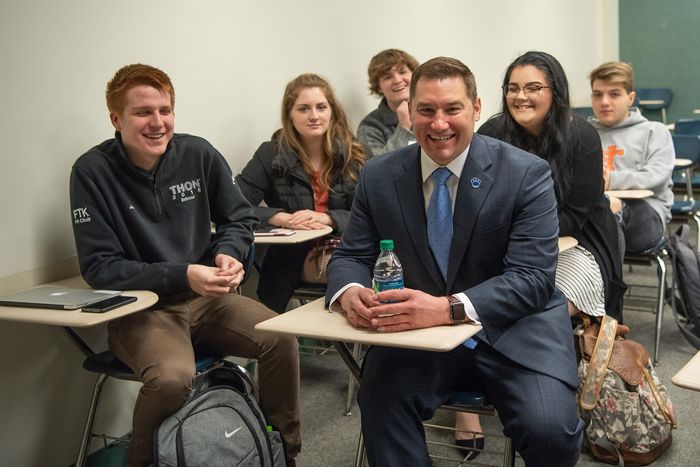 Congressman Guy Reschenthaler was first elected to the Pennsylvania State Senate in November 2015. Reschenthaler formerly presided over District Court 5-2-16 in the South Hills of Pittsburgh. Reschenthaler attended Penn State Behrend where he received the Most Outstanding First Year Student Award in 2002 and graduated with a bachelor's degree in Political Science in 2004. In 2007, Reschenthaler graduated from Duquesne University School of Law and immediately entered into service in the U.S. Navy JAG Corps. As a naval officer, Reschenthaler deployed to Baghdad, Iraq, where he prosecuted nearly 100 terrorists and insurgents, receiving 92 convictions. In 2010, Reschenthaler defended a Navy SEAL falsely accused of abusing an Iraqi terrorist. His efforts throughout the jury trial led to a full acquittal for his client and are memorialized in Honor & Betrayal, a book by best-selling author Patrick Robinson. In his last naval assignment, Reschenthaler served as Officer-in-Charge of the Texas-Oklahoma Area of Operations. After overseeing scores of military defense cases and litigating numerous trials to verdict, the South Texas Federal Bar Association awarded him the Michael Taylor Shelby Award for Ethics, Dedication, and Professionalism in the practice of law. In spring 2012, Reschenthaler returned to his hometown to enter private practice. Reschenthaler exclusively practices real estate law, where he represents land developers and home investors. On November 6, 2018, Reschenthaler won the U.S. House seat for Pennsylvania's 14th District.

Melissa Shirey received her bachelor’s degree in Political Science from Penn State Behrend, her master’s degree in public administration from Gannon University, and her J.D. from The Ohio State University. Since completing law school, she has practiced law in Erie County, where she is a partner at The Family Law Group and specializes in divorce, child support, and child custody cases. Shirey was the 2016 president of the Erie County Bar Association.

Sheila Fitzgerald Sterrett holds a bachelor's degree in communication from Clarion University as well as a master's degree in public administration from Gannon University. She has two children and resides in Harborcreek. Sheila began her career as a legislative assistant for the late State Representative Karl Boyes, and she is currently northwest Pennsylvania regional manager for U.S. Senator Pat Toomey, after serving many years as director of government affairs for the Manufacturer and Business Association. In addition, she also represents Erie County on the Republican State Committee for Pennsylvania and has worked on countless campaigns at the local, state, and national level. Sheila is also a graduate of the Anne Anstine Excellence in Public Service series as well as Leadership Erie.

Judge John Trucilla is the President Judge of the Erie County Court of Common Pleas, to which he was first elected in 2001. He received his undergraduate degree in political science and his law degree from the University of Dayton. He is also a former Assistant United States Attorney for the western district of Pennsylvania.

Matt Wiertel completed an M.B.A. degree at Penn State Behrend, where he also received his bachelor's degree in Management with minors in Political Science and Economics. He is currently the director of business development at Velocity Network. In his role at Velocity Network, Wiertel works on business planning, acquisitions, and technology projects to grow the company’s information technology and internet service offerings in northwest Pennsylvania. Matt also has served as president of Young Erie Professionals and as a member of the Erie Regional Chamber and Growth Partnership’s Board of Directors.

Perry N. Wood, Ed.D., is the executive director of the Erie County Gaming Revenue Authority (ECGRA). Wood received his doctorate in social and comparative analysis in education policy from the University of Pittsburgh, and both his master's degree in organizational leadership and bachelor's degree in political science from Mercyhurst University. He has served in an advisory capacity to the Brookings Metropolitan Planning Council and the Penn State Behrend Council of Fellows. Wood is the co-author of a Jefferson Educational Society essay titled Erie’s Advanced Industries (2015) and is active in the research and policy development of regional economic and community development organizations. His accomplishments have been recognized in the books Our Towns: A 100,000-Mile Journey into the Heart of America (2018) and The New Localism: How Cities Can Thrive in the Age of Populism (2017). He has been recognized as a Top 40 Under 40 leader shaping Erie County’s future and is a graduate of both the Erie County Civic Leadership Academy and Leadership Erie. His research interests include: youth employability interventions, industry-university partnerships, main street redevelopment, economic development ecosystems, and change leadership.

We thank Sister Joan Chittister, Beth Frederick, Troy Frederick, and Joseph Conti for their previous service to the Advisory Board.

John Falcone, an Erie attorney, former county judge, and longtime member of the Penn State Behrend Political Science Advisory Board, passed away in February 2017. Falcone was a student at Penn State Behrend during the campus's first year of existence and attended most Political Science Advisory Board meetings each semester since the Board's creation in 2009. At those meetings, he would offer advice and mentorship to political science students, as well as entertaining stories about Behrend's early years. We thank him for his service and miss his presence.