The Public Policy Fund at Penn State Behrend was created to bring together a diversity of perspectives to inform public policy decisions that affect the Erie region and similar communities in the Great Lakes and Ohio River Basin areas. The Fund work draws on the expertise of Behrend Political Science faculty members and those in numerous other disciplines. The Public Policy Bulletin highlights the achievements of the Public Policy Fund, our Faculty Affiliates, and students for the academic year of 2021–2022. We are grateful for the continued support of Rev. Charles Brock and Penn State Behrend.

Events Hosted and Sponsored by the Public Policy Fund

In 2022, PPF hosted a series of events on the issues surrounding Ukraine and Russian Aggression. 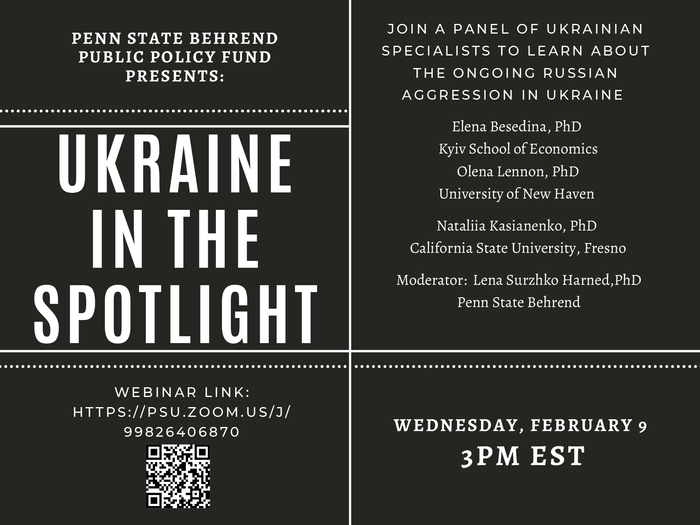 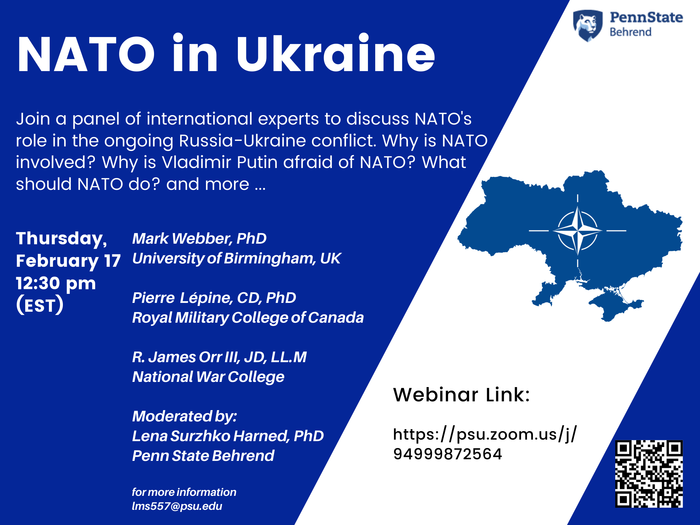 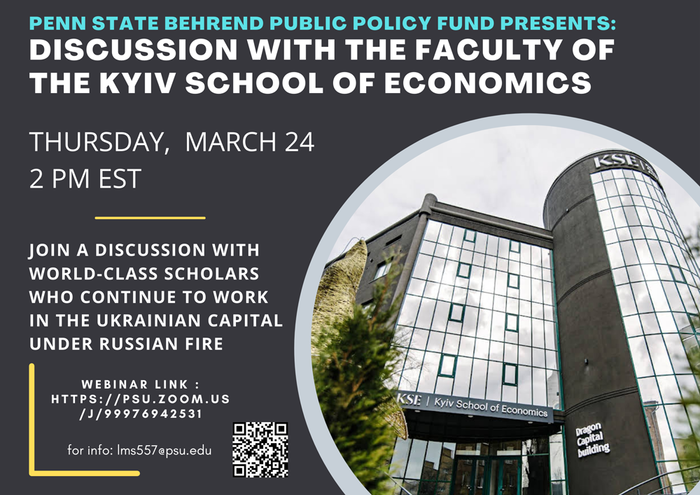 March 24, 2022 – “Discussion with the Faculty of the Kyiv School of Economics”
The program included Tymofiy Mylovanov, president of the Kyiv School of Economics and an adviser to Ukraine’s presidential administration. He previously served as minister of economic development, trade, and agriculture for Ukraine. Mylovanov was joined by colleagues who continue to work in Kyiv, including Tymofii Brik, the head of sociological research at the Kyiv School of Economics; Anna Bulakh, an expert on international security and technology and a member of the Hybrid Warfare Task Force in Kyiv; Oleg Nivievskyi, a coordinator of the UaFoodTrade research project, a partnership with the Leibniz Institute of Agricultural Development in Transition Economies. Moderated by Lena Surzhko Harned, assistant teaching professor of political science at Penn State Behrend.

April 7, 2022 – “Cancel Culture Today: Its History and Impact”
This event was the launching of Discussion Without Judgement: A Discussion Series hosted by The Publix Voice in a debut partnership with Penn State Erie, The Behrend College. Moderators Marcus Atkinson and Dr. Lena Surzkho Harned discussed cancel culture with a panel of distinguished community members, students, and faculty guests. The panel discussed the history of cancel culture, its impact on college campuses and communities, and the likelihood of reconciliation during the age of social media.

Since March 2022, Dr. Elisa Beshero-Bondar has been participating in Saving Ukrainian Heritage Online (SUCHO), a large-scale collective effort, with thousands of volunteers around the world, to archive Ukrainian websites, in an effort to preserve their contents when they are at risk of being shut down or removed or rewritten as part of the Russian invasion and efforts to suppress Ukrainian culture. Find out how you can contribute! Volunteers don’t need a highly technical background to participate but must be willing to take time to read tutorials to work with archiving software and the Wayback Machine, and run archiving jobs in the background on your computer that sometimes take multiple days to complete. Off and on through the past semester, Beshero-Bondar has been archiving Ukrainian news and e-book sites, as well as university websites.

In a partnership with the Magee-Womens Research Institute, an interdisciplinary team, which includes Adam Simpson, Samuel Nutile, Jeremiah Keyes, Ashley Russell, Cody Wood, and Ronald Buckanovich, is investigating potential environmental risk factors for breast cancer in Erie County residents. Specifically, they are examining whether dietary exposure to polychlorinated biphenyls (PCBs)--legacy contaminants that bioaccumulate in fish tissue-- contributes to the induction or proliferation of cancerous growth in breast tissue. This past year, the team has determined the identity and concentration of various PCB congeners present in five different fish species: yellow perch, bluegill, freshwater drum, walleye, and steelhead trout. They are currently using pharmacokinetic modeling to estimate the assimilation of each congener throughout the human body, including breast tissue. This year they plan to expose healthy and cancerous cell lines to their predicted PCB concentrations to better understand the mechanistic link between legacy contamination and carcinogenesis.

She has given interviews to Erie News Now, The Erie Times News, Australian Broadcasting Corporation’s News Radio, and Radio New Zealand. She was a guest in several podcasts, including Behrend Talks, with Dr. Ralph Ford, and Next with Marcus Atkinson, a WQLN podcast.

Grace Dill, a senior DIGIT major, presented the NativeGone Digital Project at this year's Gender Conference on April 5 at Penn State Behrend. The project, which continues in the fall, investigates data about violent crimes, particularly against murdered and missing indigenous women and girls from the Bakken region (North Dakota and surrounding states) that were part of the Bakken Oil boom and a major site of the fracking industry in the past two decades.

Olivia Hodgson, a junior Environmental Science major and an undergraduate researcher working with Dr. Adam Simpson, presented her co-authored paper "Are you sure you want to eat that? Investigating polychlorinated biphenyl concentrations in Lake Erie fishes” at the poster session at the 17th Annual Research Symposium hosted by the Regional Science Consortium in Erie, PA. (Fall 2021). She won first place for her presentation of this research.

Julia Shields completed the public policy option in the Behrend Political Science major and graduated in May 2022 with a sustainability leadership minor. She spent the fall 2021 semester studying abroad in Rome. Julia worked with Dr. Sherri “Sam” Mason, Director of Sustainability, on the Behrend campus Sustainability Master Plan and on a campus Greenhouse Gas assessment. For Earth Day weekend in April 2022, Julia worked on a “Found Objects” “Trash to Treasure" art show at the City Gallery in downtown Erie. Also in April 2022, she was given the “Outstanding Political Science Major” award.