Team's vehicle traveled 2,420 miles on a single gallon of gas

A Penn State Behrend team won the SAE International Supermileage Challenge, traveling 2,420 miles on a single gallon of gas. The team also won the event in 2018.

ERIE, Pa. — The Society of Automotive Engineers (SAE) club at Penn State Behrend ended this year’s International Supermileage Challenge the same way it finished the 2018 event: in the winner’s circle.

The path to this year’s championship, however, could not have been more different.

The Behrend SAE club earned its second consecutive first-place finish at this year’s event, which was held June 6 and 7 at Eaton Corp.’s Marshall Proving Grounds test track in Michigan. The supermileage competition challenges teams to create vehicles that squeeze the most mileage out of a single tank of high-octane gasoline. The Behrend vehicle circled the track at 2,420 mpg.

The team’s 2018 vehicle traveled 3,013 miles on a single gallon of gas. For a number of reasons, however, this year’s finish is even more impressive.

“Basically, everything that could have gone wrong, went wrong,” said Aleksey Checkeye, vice president of the Behrend SAE club and the driver of the vehicle. “I think this year was probably the most rewarding, simply because we did not know if we would make it onto the track.”

Things got off to a bad start right from the beginning, as the truck carrying the team’s vehicle was in a minor accident as it merged onto the interstate toward Michigan.

Things only got worse once the team arrived.

“We got there and tried to pass technical inspection, and I realized that I could barely steer the car,” Checkeye said. “We were trying to steer the car so hard that it actually ripped some of the carbon fiber underneath.”

The team improvised, as good engineers often do. From 6 p.m. to almost midnight on the first night of the competition, they made adjustments to the vehicle. Multiple trips were made to Walmart and Lowe’s. Tempers flared.

“Everyone was really stressed out,” said Max Magera, the club’s president. “We had somewhat of a plan, but we still weren’t sure what we were going to do. We just looked at the parts we had and the state of the car, and we tried to figure out the easiest solution to the problem.” 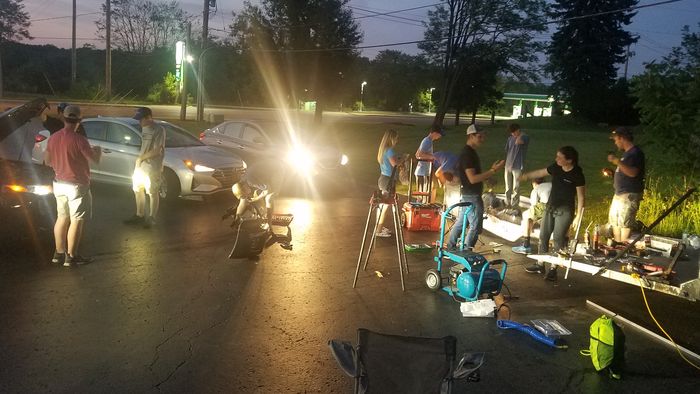 Members of Penn State Behrend's SAE Supermileage team worked late into the night before the track competition, trying to repair problems with the vehicle's starter motor and steering system.

Some team members cut new aluminum and steel parts. Some created a fixture to mount as a base on the vehicle. Others tackled the steering issue.

The next morning, before tech inspection, the team again was forced to improvise when the starter motor would not work. After some adjustments, the vehicle was ready for its first run on the track. The result: 180 miles per gallon.

“That really dampened the mood,” Checkeye said. “We were like, ‘Is that missing another zero?’”

Once again, the team relied on its engineering background to make changes. Team members spent two hours readjusting the throttle cable, so the vehicle would accelerate better. They also replaced the tires.

The vehicle’s efficiency improved over the next two runs: 1,880 mpg, followed by the competition-winning run of 2,416 mpg.

“That was literally a complete 180 of seeing that 180 up on the board at first,” Checkeye said. “We all felt pretty defeated, so to come out and put a number like that on the board was just a great feeling.”

“On Thursday night, we did not know if we were even going to get a chance to compete because it took so much energy and effort to make sure we’d get through tech inspection,” Magera said. “So to go out and actually win the thing, that was just kind of the cherry on top.” 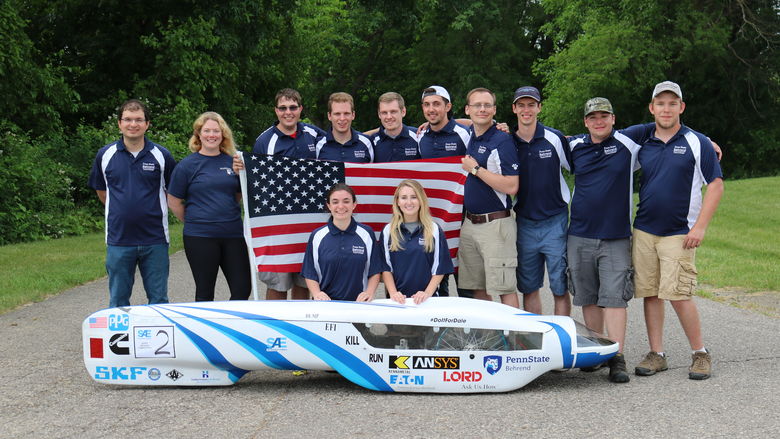