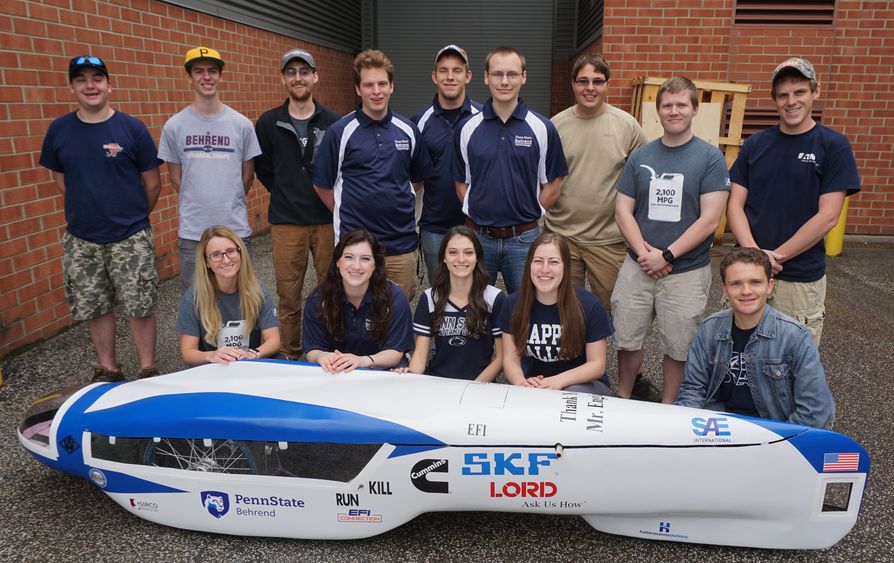 ERIE, Pa. — The students in the Society of Automotive Engineers (SAE) Club at Penn State Erie, The Behrend College, knew a change was needed.

For years, they had used a carburetor engine in the cars they entered in the International Supermileage Challenge, a competition that challenges teams to create vehicles that squeeze the most mileage out of a single tank of high-octane gasoline. Behrend teams had performed well, earning two first-place finishes and one second-place finish since 2012, but it was time to adapt.

“We had maxed out what we could do with a carburetor engine,” said Ryan Dombrosky, a Mount Pleasant native and president of Penn State Behrend’s SAE Club. “We decided to change over to a fuel-injection engine. This meant we had to revamp pretty much everything on the engine and really test and fine-tune it. It’s now just like what’s in your typical passenger car, only scaled down.”

Not too shabby for a first go-around with the new engine.

“This was a learning experience for us,” said Dombrosky, who graduated from Penn State Behrend in May with a mechanical engineering degree. “With the new engine, the great thing is there’s no residual fuel wasted, and now that we have switched over, we won’t change back. Our team will be able to refine it for next year.”

The engine is about the only similarity between the club’s vehicle and a traditional commercial automobile. The vehicle measures around eight feet long and less than two feet high. Its lightweight, aerodynamic design contributes to the fuel efficiency it delivers.

It’s also ideal for the “burn and coast” method of driving that the Behrend SAE team uses. At the start of the competition, the team’s driver starts the engine, accelerates for a bit and then turns the engine off to coast the remainder of the course. It’s an intentional attempt at fuel conservation.

Mary Beth Burbules knows the driving style well. The Erie native drove the vehicle again this year, the fourth-straight year she has taken on that role.

“If I were ever claustrophobic, I would have had to get over that four years ago,” said Burbules, who graduated in May with a mechanical engineering degree. “As long as you can reach the handle that has your throttle, your brake handle and the kill switch of the vehicle, you’re golden.”

In the future, the team’s goal is to travel 3,000 miles on a single gallon of gas. This year’s first-place team, Universite’ Laval, which also uses a fuel-injection engine, finished with 4,113 miles. As the team gains more experience with the new engine, Dombrosky thinks such a number could be within reach.

“Most teams have not moved to this type of engine, so we’re actually ahead of the curve,” he said. “The team will take a look at everything, and we’ll see what we can improve.” 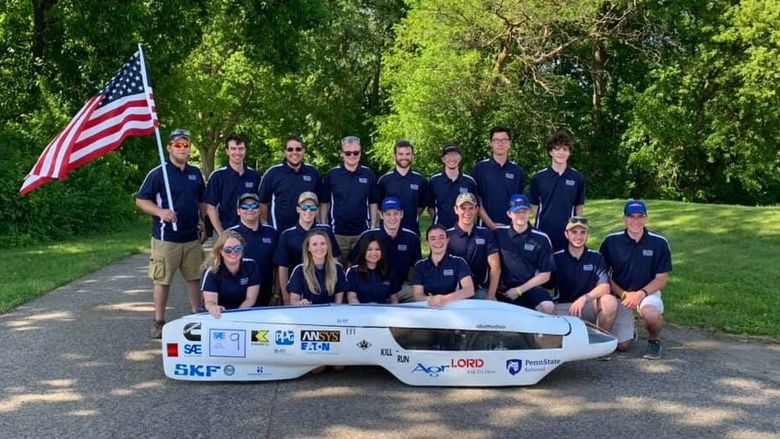