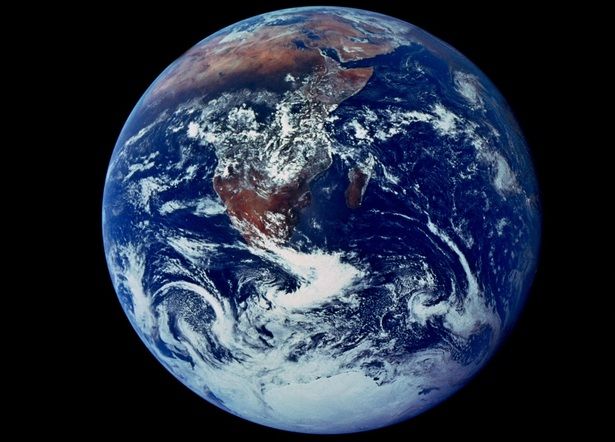 The "Blue Marble" photo of Earth, taken from Apollo 17, is one of the most widely reproduced photographs in history.

ERIE, Pa. — Jack Schmitt’s travel photos were better than most. In 1972, he looked through the viewfinder of a 70mm Hasselblad camera and saw the Earth — the whole marbled circle of it — as few others have.

Schmitt, a Harvard-trained geologist, was a pilot on Apollo 17, the last human mission to the moon. Five hours into the trip, he or another of the crew members — all three would later claim credit for it — snapped the first photograph of a perfect-circle Earth. The image, which was later titled “Blue Marble,” is one of the most widely reproduced photographs in history. It even appeared on postage stamps, and in the setup wizard for Microsoft’s Windows 98.

NASA’s photographic archive, including “Blue Marble,” will be the focus of the next Open House Night in Astronomy at Penn State Behrend. The Jan. 30 program will feature Joseph F. Reese, a professor of geology at Edinboro University of Pennsylvania. His talk is titled “Seeing and Feeling the Earth through Astronaut Photography.”

The program, which is free and open to the public, will begin at 7:30 p.m. in Room 101 of the Otto Behrend Science building. A presentation on the current night sky will precede Reese’s talk, beginning at 6:30 p.m. in the Yahn Planetarium.

Reese will look beyond the novelty of astronaut snapshots — David Scott emerging from the Apollo 9 command module, or Neil Armstrong walking on the moon. Photography often was a formal element of NASA’s missions: The Apollo 7 crew, for example, used a “Target of Opportunity” chart to schedule nearly 500 photos over their 10-day mission.

That vantage point altered our view of the Earth. When astronauts saw how far they were from home, they often felt both awe and a new sense of responsibility for the planet — a mental shift known as the “Overview Effect.”

“It’s difficult to describe it,” astronaut Nicole Stott once said. “You’re seeing it, but you’re feeling it, too. It’s a feeling of interconnectivity that you sometimes just don’t get when you’re in the middle of something. I think separating ourselves from things that are important to us is good, because you then appreciate it in a new way.”

Open House Nights in Astronomy are an outreach program of the School of Science at Penn State Behrend. These scientific presentations are intended for ages 8 and up. For more information, contact the school at 814-898-6105.