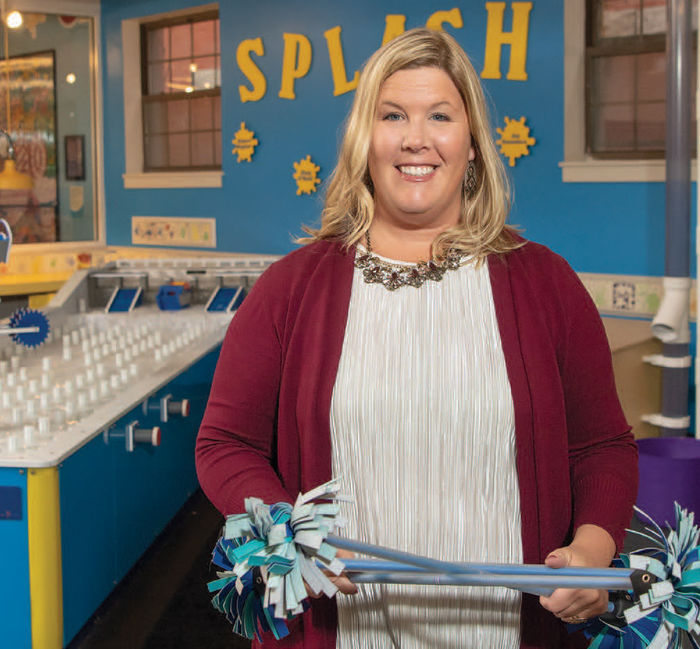 As she weaves through the museum, past kids getting their hands (and everything else) wet at a water table, children plugging pegs into an oversized Lite-Brite, and a toddler giggling his way down an indoor slide, Ainslie (Ulmer) Brosig, executive director of the ExpERIEnce Children’s Museum, easily talks above the din.

Brosig opens the door to a classroom and explains that it is the only private (read: quiet) space in the museum to talk.

She’s not complaining. Brosig couldn’t be happier to have a facility full of noise.

Things looked bleak for the children’s museum when Brosig took over five years ago. Attendance and funding were at an all-time low. Exhibits were stale and in need of repairs.

Brosig, a 2001 Communication graduate, had no executive experience. But having worked in community relations at the Erie Zoo for several years, she had an insider’s perspective on nonprofit operations. And, as an Erie-area mother of three, she was familiar with the museum and its offerings, which seemed to her to be scattershot.

“The museum was trying to be too many things,” she said. “We really needed to step back and look at who we were, what we had to offer, and what the community needed us to be.”

Brosig and the museum’s board of directors narrowed the facility’s focus to children ages 8 and under, worked to align the exhibits with Pennsylvania’s early education state standards, and made it a mission to see every kindergarten student in Erie County.

“We know that if children are introduced to STEAM (science, technology, engineering, art, and math) early, it piques their curiosity, gives them confidence to experiment, and influences their future career choices,” Brosig said. “They think they’re playing, but they are learning.”

Under Brosig’s direction, the museum has tripled membership, has doubled attendance, and is now embarking on a major expansion.

“If you look at the trajectory of our attendance, which this year will surpass 63,000, and you extend that out five years, we’re running out of room,” Brosig said.

This summer, the museum will unveil plans that include not only more exhibit space, but also structural changes that will allow for safety and parking improvements.

These are all things that Brosig has to think about as the executive director.

“Ultimately, I’m responsible for the success of this organization,” she said. “That includes everything from finances to guest experience to safety to staff management.”

Brosig said her Communication degree prepared her well to juggle the multiple responsibilities.

“It’s a versatile degree that touches on many areas of business,” she said. “I had classes in everything from public relations to creative writing to business law. I also did a lot of group projects, and that teamwork experience was especially helpful in my current role.”

The museum is not a one-woman show. Brosig is quick to give credit to the hardworking staff, volunteers, and board of directors, whose support allows for continued growth.

“This summer, we’re partnering with College for Kids at Behrend to provide week-long STEAM day camps for youngsters at the museum,” she said. “Up until now, the college has not been able to offer a lot of programming for very young kids, but, of course, that’s what we specialize in. So we’re happy to fill that need.”

What you might be surprised to know: “The ExpERIEnce Children’s Museum gives back more than $100,000 annually in free programming. We feel strongly about being a good community partner.”

On job satisfaction: “It’s rewarding to walk through the museum and see families having fun together. Children remember their mom going down the slide or their dad helping them build a dam in the water table. Those types of interactions are precious and few for many families today.”