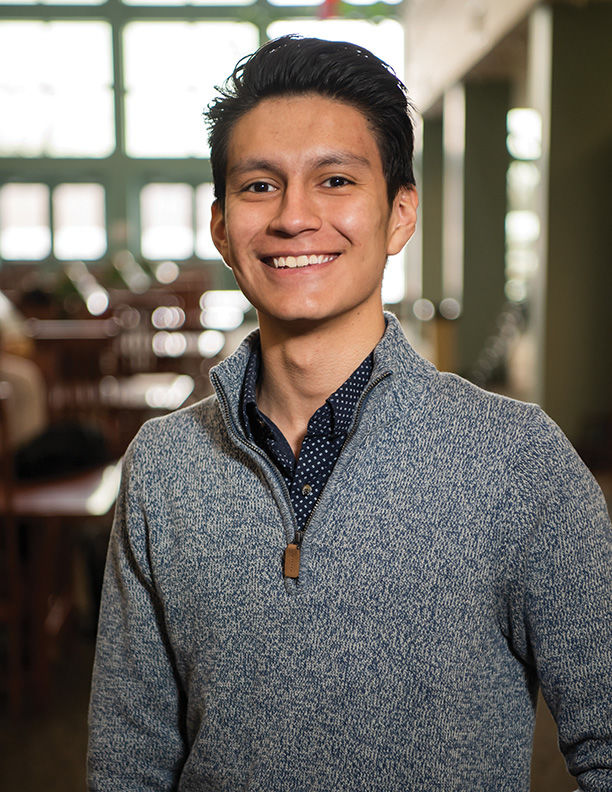 Psychology major, Angel Mora, wants to use his story to inspire and help others.

Angel Mora wants to talk, not about the weather or movies, but about bigger things. He has questions. He carries them on cards in his backpack in a little white cardboard box labeled “Big Talk.”

The cards, inspired by a TED talk by Kalina Silverman, are printed with questions such as, “What do you miss?” and “Where do you find peace?” They are marketed on Amazon.com as a way to “skip the small talk and connect with anyone by encouraging deeper and more meaningful relationships.”

It’s just the kind of thing you might expect a Psychology major like Mora to carry around. He is fascinated by people—how they think, how they feel, and why they do the things they do. It goes beyond curiosity for Mora. He doesn’t want to simply study humans, but help them. He’s convinced he can do that by teaching them to do the one thing that has always come naturally to him—focusing on the positive and noticing the beauty and good in the world.

It’s a remarkable trait for a young man who lost his mother, his native culture, and his bearings at an age when most kids are worried about passing algebra and getting a driver’s license.

“There have been many moments in my life where I have felt lost in the darkness, but not for long because there has always been something inside of me that reminds me that, although right now I might not understand where this challenge is going to take me nor what I can learn from it, everything is happening for a reason,” he said. “Like Steve Jobs once said: ‘You can’t connect the dots looking forward; you can only connect them looking backward. So you have to trust that the dots will somehow connect in your future.’”

Mora grew up in Colombia with his mother and older brother, Carlos. Their father moved to the United States when the boys were very young but was supportive, working to meet his sons’ economic and emotional needs despite the distance between them.

It was always the plan for Angel and Carlos to join their father in the U.S., but the death of their mother from cancer when Angel was just 15 years old hastened that journey.

"I was very excited to live with my dad, but it was hard for all of us to adjust so quickly,” Mora said. “My father had been living on his own for fifteen years, and suddenly he had two teenagers in his house! I couldn’t really speak English, so I felt lost in the process of adapting to my new country.”

Mora enrolled in McDowell High School in Erie, entering as a junior in August 2016, and immediately began making a positive impression on his peers. Eager to connect with others, he mastered speaking English in less than six months. Writing it, however, was a different matter.

“One of my biggest challenges has been writing papers and essays,” he said. “Writing in English is very different from speaking it.”

He was determined, however, to turn adversity into opportunity.

Before Mora’s senior year in high school, he participated in a Behrend summer program designed to give diverse, first-generation college-seekers an introduction to higher education. Mora liked what he saw. Also, he had family at Behrend: Carlos already was a Political Science major.

Much like when he arrived in the United States a few years earlier, when Angel got to Behrend, he was all in. In his first-year, he ran for—and won—a position as a Student Government Association senator, became a Lion Ambassador, enrolled in the new Trippe Hall Global Boarders program, and joined the Model UN, International Student Association, Greener Behrend, and Lion Entertainment Board. He participated in Alternative Spring Break this year, is a global ambassador for a pilot program in the International Student Services office, and will serve as an orientation leader during Welcome Week this fall.

He has been mentoring an Erie County high school student from Puerto Rico through the college’s Susan Hirt Hagen Center for Community Outreach, Research, and Evaluation’s Positive Youth Development Program.

“The student I’m paired with has experienced many of the same situations that I have in my life,” he said. “I love being able to listen to him and give him the kind of advice that has helped me.”

It’s great career training: Angel hopes to turn his passion for positivity into a job.

“I’d like to be a professional motivational speaker and promote positive psychology,” he said. “I want to use my story to demonstrate that we are all vulnerable to things that we cannot control, but we can be resilient and use those very things to empower us.”

Mora recently received the Irving H. Kochel Award, which is given to a student who demonstrates qualities of character, scholarship, leadership, and citizenship through involvement in programs and services that positively influence fellow students and contribute to the college.

On leaving the tropics behind: I love the weather in Pennsylvania and the changing seasons, even winter, but especially autumn. It’s so beautiful.

On philanthropic support: The economic aid that I have received has allowed me to be successful here at Behrend. If I didn’t have that, I could not be nearly as involved on campus as I am.

On poetry as a saving grace: When my mother died, poetry was my rock, especially “The Black Heralds” by César Vallejo.