Use these links to jump to a specific item below. 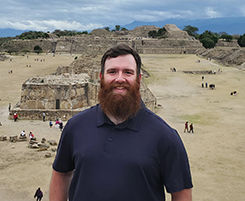 After two years of disruptions, Penn State Behrend students have returned to traveling the globe and soaking up the lessons that other cultures have to offer.

Catlin Lowes is a senior majoring in History who attended a Spanish language program in Puebla, Mexico, in May and June. Living with a Puebla family increased his fluency in Spanish and deepened his appreciation of Mexico.

“The experience showed me how Mexican people view and interact with their history in a way that reading a book written in English never could,” Lowes said. “There is no substitute for visiting a country and interacting with its people to get to know the place. It changed a lot of my understanding of Mexico and its culture.”

In addition to being an exciting, eye-opening adventure, study abroad can give students an academic and career advantage.

“Educationally, it really does make a big difference, as employers are looking for that kind of experience,” said Ruth Pflueger, director of the college’s Learning Resource Center and coordinator of study abroad programming.

Lowes has long had an interest in Mexico and what he calls the “tangled history” between that country and the United States, and he said living with a host family was a powerful experience.

“I think seeing a country, experiencing its culture, and getting to know some of its people are critical to understanding a place,” he said.

Lowes received a competitive national award known as the Gilman Scholarship. That kind of award, in addition to Penn State scholarships and an endowment that provides study abroad funding, can make travel attainable for many students. Programs have a broad range of price tags, and Pflueger said getting at least some funding is likely.

For those who do study abroad, Pflueger said the lessons learned are priceless: “They really come back changed and having grown in maturity. These students are going to do well. They are enthusiastic and curious. They can go to unfamiliar places and adapt.”

Dr. Eric Corty, professor of psychology and school director emeritus, retired in June after serving seven years as school director and almost thirty years as a faculty member. He capped his career by establishing the Mirror Project, a funding effort intended to contribute to the diversity of teachers in Erie’s public schools by covering the four-year tuition of local students who agree to remain in their hometown to teach after graduation.

Dr. Melanie D. Hetzel-Riggin, professor of psychology, won the university’s 2022 Faculty Outreach Award. Dr. Joshua Shaw, associate professor of philosophy, won the Tartt First Fiction Award for his forthcoming book of short fiction from Livingston Press, All We Could Have Been and More. Dr. Lena Surzhko-Harned, associate teaching professor of political science, was named to the Erie Reader’s “Erie’s 40 under 40” class of 2022. 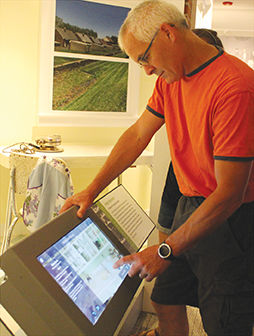 The Hagen History Center in downtown Erie recently opened a new exhibit, “The Story of Us.”

“The Story of Us”

The Hagen History Center in downtown Erie recently opened a new exhibit, “The Story of Us,” that includes interactive displays created by student researchers in Behrend’s VAR (Virtual/Augmented Reality) Lab under the direction of Dr. Christopher Shelton, assistant professor of clinical psychology. The 3,000-square-foot exhibit highlights the growth of Erie from its indigenous people to its later-arriving immigrants. Interactive displays encourage visitors to view artifacts from all angles (views created using 3-D scanned images), make a recipe (virtually) from the 1890s or the 1950s, and more. Visit eriehistory.org for more about the exhibit.

To allow for a larger stage and accommodate a bigger audience, Penn State Behrend’s spring production, Chicago, was relocated from the Studio Theatre to the Fasenmeyer Building. The show, featuring nearly two dozen Behrend students, was a hit, selling out five of six performances. It was directed by Emily Cassano, assistant teaching professor of music, theatre, and visual arts.

What’s an Olympic-level runner to do when he’s injured and can’t work out and the entire country is taking a pandemic pause? How does a guy who runs sub-4-minute-miles survive being stuck at home for months?

Trading in his racing flats for a tool belt, Ricardo Estremera, 36, assistant teaching professor of Spanish, and his wife, Sherez Mohamed, a professor of Spanish and linguistics at Mercyhurst University in Erie, invested in a fixer-upper and got to work.

“We figured it would keep me busy,” said Estremera, who was training for a spot on the Puerto Rico Olympic steeplechase team when Achilles tendon issues forced a layoff.

The couple had their work cut out for them. The house, while solidly built, needed an entire interior overhaul.

Estremera approached the job with the same energy and enthusiasm he takes to the track, and Mohamed did her share of the remodeling, renovation, and restoration work, too. Estremera learned his handyman skills as a reluctant teenage helper to his father, repairing things around their home in Puerto Rico.

“When you’re a kid, parents make you do things and you hate it, but you end up learning a lot,” he said. “I didn’t like having to help fix things back then, but I love it now. Going to Home Depot is a good day for me.”

The couple hit the home renovation project hard that summer and transformed it into a modern home with an open concept. See photos on instagram.com/theprofessorsflip.

Read more about Estremera, his athletic achievements, and his home improvement endeavors at behrendblog.com.

Since Russia invaded Ukraine in February, Dr. Lena Surzhko-Harned, associate teaching professor of political science, has been in demand by news organizations to provide context and background on the war.

Surzhko-Harned, a native of Ukraine, has researched Russian, Ukrainian, and European politics extensively, giving her deep insight into how the war is affecting generations of Ukrainians. Her knowledge of the history between the two countries provides her with an in-depth perspective on the political climate and players involved in those countries and Europe as a whole.

She has spoken to audiences in settings ranging from Penn State Behrend to the Erie Bar Association to the University of Massachusetts Boston and has been interviewed by myriad media outlets in the United States as well as the Australian Broadcasting Corporation’s News Radio and Radio New Zealand.

“The Russian war in Ukraine is surrounded by much misinformation and propaganda,” Surzhko-Harned said. “It is important that the public be well-informed and equipped to understand this complex situation and its effects. I am also humbled and honored to be able to speak to so many who are interested in helping the Ukrainian people.”