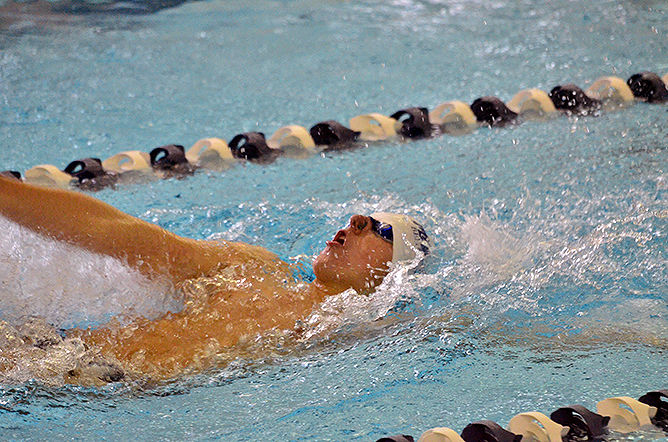 Mark Patterson, a sophomore from North Huntingdon, set a pool record in the 200 backstroke at St. Vincent on Jan. 28. He finished in 1:59.49.

The Penn State Behrend men’s swimming and diving team has been undefeated at home this season. Six student-athletes were individual winners against Pitt-Bradford on Jan. 27.

The college’s basketball, volleyball and track and field teams also were in action last week. Here are the highlights.

Five Lions had double-digit scoring against Mt. Aloysius, including Justin Gorney, a sophomore from South Park, who had a career-high 21 points.

Sadie Zielinski, a senior from Erie, scored a career-high 23 points in the win over D’Youville, including five three-pointers.

Matthew Grafton, a senior from Worthington, won the 60-meter hurdles at the Brockport Invitational, finishing in 8.62 seconds. Two other Lions – Marcus Haesler, a junior from North East, and Max Livingood, a sophomore from Washington – finished in the top 10.

Paige Allen, a senior from Butler, won the 400-meter dash at the Brockport Invitational, finishing in 59.97 seconds. She qualified for the Eastern College Athletic Conference Championships.