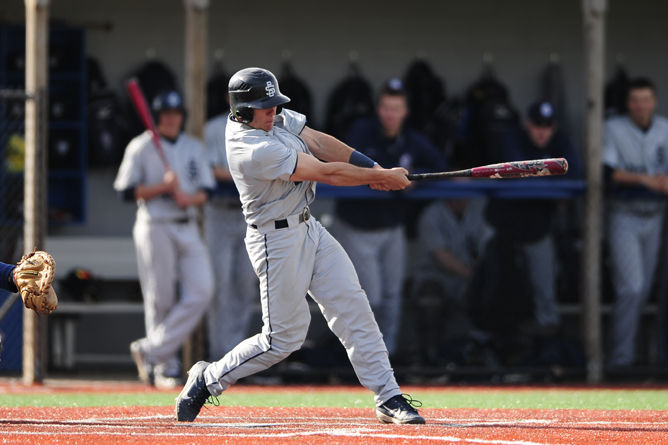 With a single, a double and a home run against D’Youville, Brian Bohman, a senior from Erie, surpassed the 200-hit mark in his career at Penn State Behrend.

The campus' golf, tennis, and track and field teams also were in action last week. Here are the highlights:

The Lions finished conference play with an 11-5 record, earning a bye in the first round of the AMCC tournament, which begins May 11.

Rachel Miller, a senior from North East, struck out 12 batters in 16.1 innings of pitching. She now ranks second in career wins at Penn State Behrend, with 44.

Sixth (of nine teams) at the Mercyhurst Invitational

Sean Sculley, a junior from Waterford, finished in a tie for fourth at the Mercyhurst Spring Invitational. He shot 149 over two days of play.

Mitchell Obenrader, a senior from Fryburg, placed fourth in the shot put at the Ashland Alumni Open, throwing a season-best distance of 17.38 meters.

Rachel Pell, a junior from Elizabeth, placed third in the 400-meter hurdles at the Ashland Alumni Open. She set a school record with a time of 1:04.11. Haley Yenchik, a sophomore from Cecil, set a personal best in the pole vault, clearing a height of 3.51 meters.