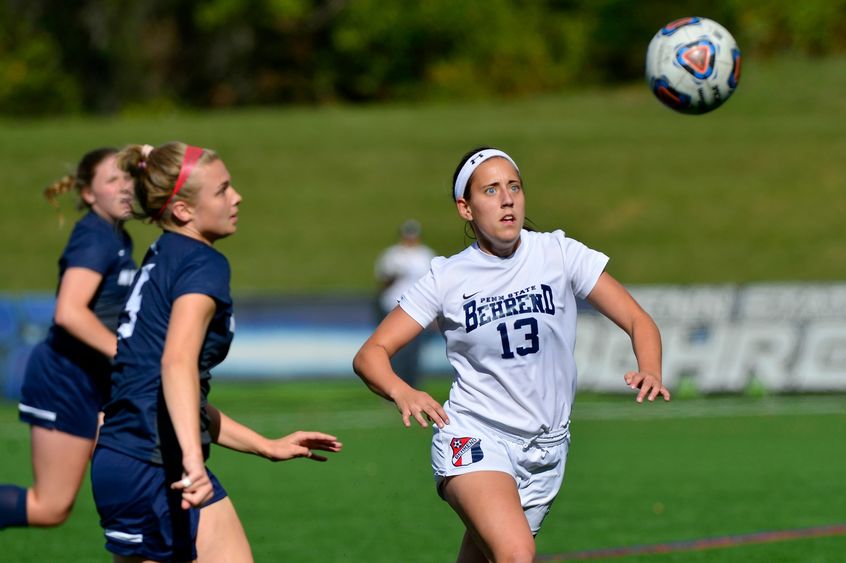 Jordan Oberlander, a senior at Penn State Behrend, has 24 goals this season -- two short of the single-season points record.

The women’s soccer team at Penn State Erie, The Behrend College, is undefeated in conference play. The team has outscored its AMCC opponents 30-1. Jordan Oberlander, a senior from Waterford, has 24 goals – two short of the single-season points record.

The college’s volleyball, cross country, tennis, water polo and swimming and diving teams also were in action last week. Here are the highlights:

Five different players scored in the win over Hilbert. Aaron Harris, a sophomore from Washington, and Shuya Takehana, a sophomore from Nagano, Japan, each scored two goals. The team had 25 shots and 10 corner kicks.

The Lions are undefeated in conference play and have outscored their AMCC opponents 30-1.

The Lions have won eight of their last nine matches. Hannah Saunders, a senior from Elizabeth, had 32 assists against La Roche; she is now third in career assists, with 3,134.

Tenth (of 31 teams) at the Oberlin College Inter-Regional Rumble.

Sixth (of 29 teams) at the Oberlin College Inter-Regional Rumble.

Kyle Frerichs, a junior from Sellersville, and Troy Valkusky, a senior from Drifton, each scored four goals in the win over Monmouth. Goalie Matt Olimski, a freshman from San Diego, made 14 saves.