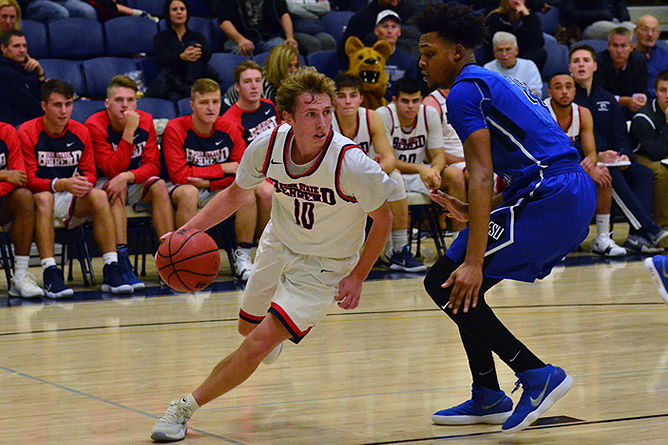 Andy Niland, a junior from Fairview, scored a career-high 28 points against Fredonia State on Nov. 15.

ERIE, Pa. — The Penn State Behrend men’s basketball team beat Fredonia State to open the 2017-18 season. The Lions shot 54.8 percent from the field in the second half.

Any Niland, a junior from Fairview, scored a career-high 28 points, including six three-pointers. He also had five rebounds, five steals and four assists.

Erika Woll, a senior from Erie, had 15 points, six rebounds and five steals against Allegheny.

Savanna Carr, a freshman from Franklin, ran in the NCAA Division III Cross Country Championships in Elsah, Ill. She finished the 6K race in 22:18.9, placing 113th.

Jake Paulson, a freshman from Erie, was undefeated at the John Carroll Duals, where he wrestled in the 184- and 197-pound weight classes. He scored back-to-back pins in the matches against Otterbein and John Carroll.

Hali Hartley, a freshman from Seven Fields, rolled three consecutive strikes to open the second game. She went on to score a 173.

Scores, results and udpates for Penn State Behrend athletics are posted at psblions.com.