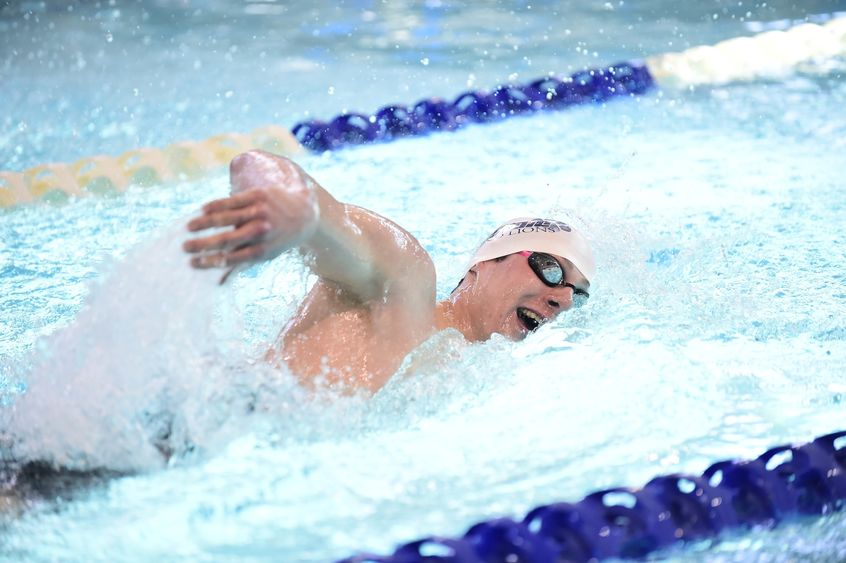 Members of the Penn State Behrend men's swimming and diving team set 10 records on the final day of the AMCC championships. The Lions won by a margin of 340 points.

ERIE, Pa. — The men’s swimming and diving team at Penn State Erie, The Behrend College, won the Allegheny Mountain Collegiate Conference championships by a margin of 340 points. The Lions set 10 records on the final day of competition. The women’s team placed second.

The college’s basketball, track and field, tennis and bowling teams also were in action last week. Here are the highlights:

The team shot a season-best 58.8 percent from the floor against Penn State Altoona, including 13 three-pointers. The Lions have the No. 2 seed for the Allegheny Mountain Collegiate Conference tournament; they play in the semifinals on Feb. 24.

The Lions are seeded fifth in the Allegheny Mountain Collegiate Conference tournament, which begins Feb. 21. The team’s win over Hilbert snapped an 11-game winning streak for the Hawks.

First (of five teams) at the AMCC championships

Second (of six teams) at the AMCC championships

The Lions won the top three spots in the 100 freestyle. Jessica Wyckoff, a junior from Elma, New York, finished first, with a time of 53.67.

First (of 10 teams) at the Kenyon College Classic

Second (of 10 teams) at the Kenyon College Classic

Five players won both singles and doubles matches against Waynesburg. Yanique Apgar, a senior from Pittsburgh, and Brenden Dollard, a sophomore from Pittsburgh, opened the match with an 8-3 win at No. 1 doubles.

Katie Wotus, a freshman from Crabtree, and Bobbi Doubet, a sophomore from Cambridge Springs, both rolled career-high games against Pitt-Bradford. Wotus bowled a 170, and Doubet had a 165.