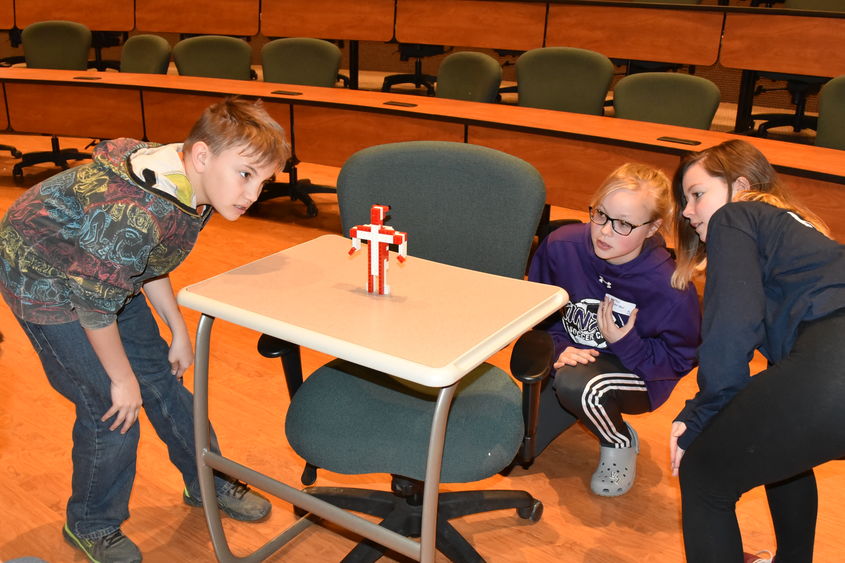 A person’s short-term memory can sometimes hold a piece of information no longer than 20 seconds. Kole Howard now knows that as well as anyone.

The seventh-grade student stared closely at the LEGO robot that he and his classmates were attempting to construct from memory at the 21st Century Kids program at Penn State Erie, The Behrend College.

“No, this is for the body. That’s where the head will go,” Howard said.

Howard and Chamberlain were among more than 150 seventh-graders from Beaty-Warren Middle School who attended the program, held Friday, April 20, at Penn State Behrend. The bi-annual program brings youth from rural populations to the college, allowing them to experience a college setting and participate in hands-on STEM workshops taught by Penn State Behrend faculty members. This was the largest group of students to ever visit the college as part of the 21st Century Kids program, which started in the spring of 2007.

Instead, one prototype sat at the opposite end of the room. Students could look at it as much as possible, but it took several seconds to even maneuver from their work stations to the desk where the prototype sat. Participants had to rely on their memories to reconstruct the robot.

That meant a team member was almost always running back and forth to double-check how the prototype was built.

The students had 30 minutes to prepare, plan and assemble their LEGO robot. Once time expired, the team with the most accurate LEGO figure would win.

As the deadline neared, the students worked feverishly to perfect their robots.

“This puts us in a situation where we have to work together, but it’s different from what we would do at school,” Carlson said. “We’re trying as hard as we can, which is what matters most.”