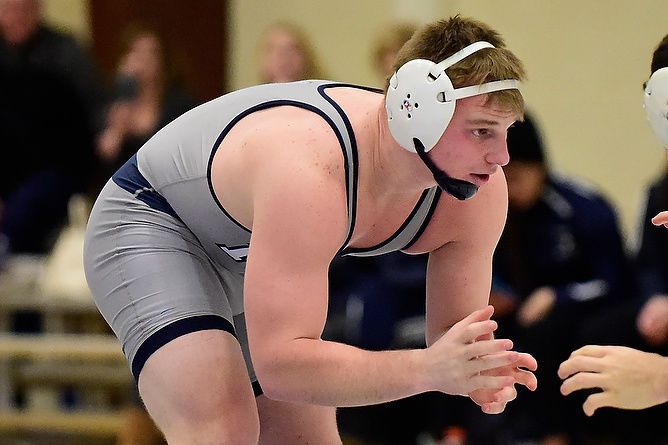 ERIE, Pa. — Penn State Behrend wrestler Jake Paulson is 15-0 in dual matches and 18-1 overall this season. He won all three of his matches at the John Reese Duals in Wilkes-Barre, taking two of them by pin.

The college’s basketball, volleyball, bowling, track and field and swimming and diving teams also were in action last week. Here are the highlights:

Dan Wanker, a senior from Pittsburgh, led the team with 22 points against Hilbert. Andy Niland, a senior from Fairview, scored 21 against Penn State Altoona.

Marcella Puglia, a freshman from Beaver Falls, won the 100 and 200 backstroke events against Penn State Altoona. She also swam a leg of the 200 medley relay, which the Lions won.

Michael Binni, a freshman from Canonsburg, and Levko Higgins, a sophomore from Palmyra, each won twice at the John Reese Duals. Binni wrestles in the 125-pound weight class; Higgins wrestles at 197.

Chris Drozynski, a junior from Stoneboro, set a school record in the 3K at the SPIRE Midwest Open. He finished in 8:43.23, qualifying for the All-Atlantic Region D3 indoor meet.

Anthony Sprentz, a senior from Cranberry Township, earned his 2,000th assist in the win over Cairn. Josh Mathews, a sophomore from Rochester, New York, scored a career-high seven aces against Mt. Union.

Brianna Lundy, a junior from North Huntingdon, led the Lions in two wins over Pitt-Bradford. She bowled a 196 in the first game and a 160 in the second. She placed 14th in a field of 62 bowlers at the Red Flash Tournament.