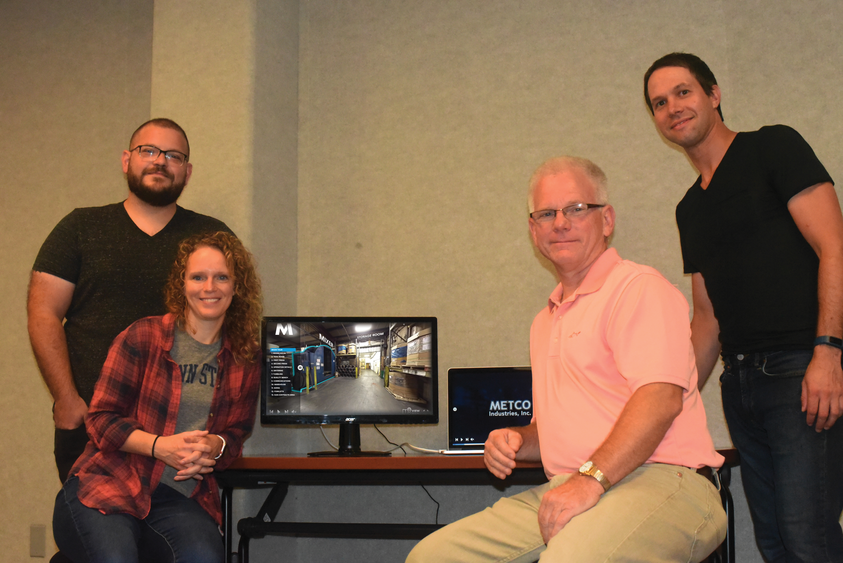 David Perkins, far left, Jodi Herman, and Jaimen Gallo, far right, are three staff members of Penn State Behrend’s Centers for Teaching and eLearning Initiatives, who recently developed a 360-degree virtual tour of Metco Industries, a powdered-metals manufacturing company located in Saint Marys. The tour is now used as part of QMM 593: Field Experiences in Manufacturing course, which is taught by Phil Jones, a lecturer in engineering, pictured in the middle right.

One advantage of Penn State Behrend’s Master of Manufacturing Management (MMM) graduate degree is that it can be pursued primarily online.

That’s somewhat unusual, given that plant visits are among the requirements of the program. However, students are now able to complete one of their plant visits from the comfort of their home.

The Centers for Teaching and eLearning Initiatives had plenty of experience with developing hybrid courses, but this project presented a new challenge. To offer this course online, the team had to create their first 360-degree video content.

“This was the perfect opportunity to dive into that immersive, 360-degree course,” said Jaimen Gallo, a developer for the Center for eLearning Initiatives. “We just started researching like crazy to see, ‘OK, what’s Google doing? What’s Microsoft doing?’”

One benefit that the staff had going for it was the diverse set of skills that each team member brought to the project.

Gallo, who developed the back-end of the tour, had plenty of help.

For weeks, the group pre-planned—researching 360-degree video best practices, mapping ideas, practicing with the appropriate equipment and software—to ensure the shoot would go as smoothly as possible. Then, in October, it was go time.

“It was what you would expect at a plant,” Herman said. “We were in a live manufacturing facility, so the lighting wasn’t ideal for shooting video, and it was very loud. It was definitely a challenging environment for capturing 360-degree video footage.”

Despite that, the team worked diligently to capture the best shots possible while not being disruptive. In just a few hours, the multimedia team was able to capture all of the needed footage.

From there, it was time to edit, record voiceovers and create the back-end navigation behind the tour. A first draft of the project was complete by January.

“It was a joy working with the team on this new student experience,” said Phil Jones, a lecturer in engineering and the course instructor of QMM 593: Field Experiences in Manufacturing. “As the instructor, I wanted to ensure the students experienced a detailed, high-quality, and technically correct manufacturing plant tour without being in the actual plant. We were successful in this and were able to provide them with a plant tour they would not have otherwise experienced.”

“It pretty much exceeded anything our course and program development teams thought it could be,” Perkins added. “I don’t think there was even a single suggestion following our final presentation before launch. We’ve seen much of the same approval from our student data, which was a big win for our team and for the course.”

Students also praised the video and what it added to the course.

“I was very impressed with the 360 video,” wrote one student in a course review. “I feel it was really well done, and it has full capabilities to pan and zoom around each area of the tour. Each area was fully explained by the guide, and the highlighted area focused your attention to the equipment that they were discussing.”

Overall, working on the project proved to be especially rewarding for the Centers for Teaching and eLearning Initiatives staff.

“We didn’t come across too many education-focused 360-degree video projects that combined the elements we wanted to use to meet this course’s learning goals. The creativity and innovation we pulled together as a team, combined with a notion that a program or course like this might not be able to work online, is what makes this so special for us,” Perkins said. 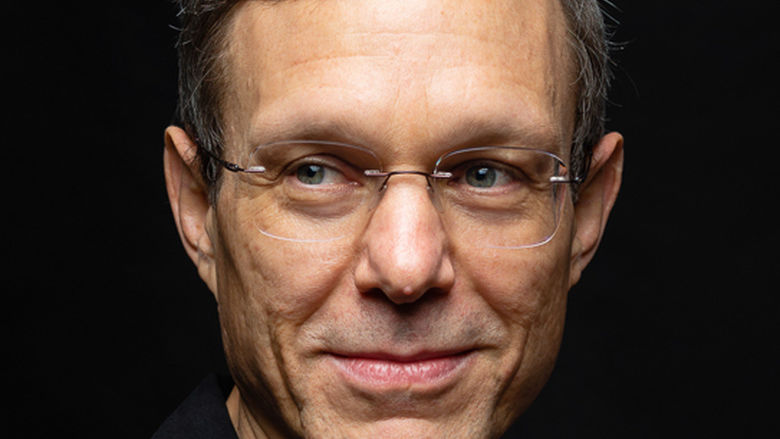