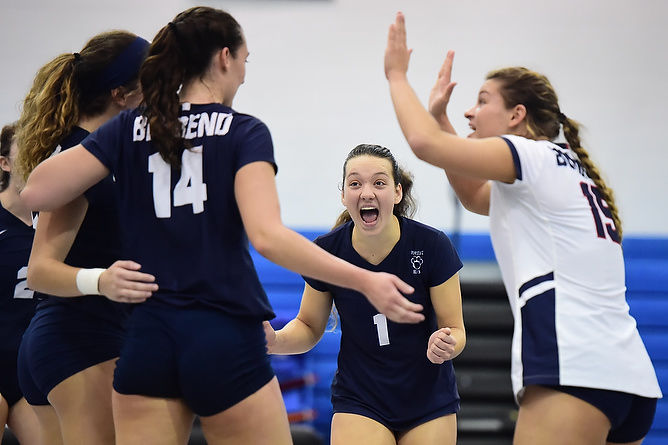 Richard Blanchard, a junior from Erie, scored on a penalty kick in the 75th minute of the Allegheny Mountain Collegiate Conference championship game, giving the Lions their 10th conference title.

Kristin Reiland, a sophomore from Fairview, had 15 kills and 15 digs in the AMCC championship game. Alex Parra, a senior from Pittsburgh, added 11 kills. Both were named to the All-Tournament Team.

The Lions won 10 events. The 200 medley relay team – Liam Watterson, a junior from Brentwood; Chase Bietz, a sophomore from Clearfield; Matt Karenbauer, a sophomore from Butler; and Quinn Fischer, a senior from Fairview – finished in 1:38.44, placing first.

Andre Sardaryzadeh, a senior from Murrieta, California, scored three goals against Arizona Ottawa and two more against Austin. Goalie Matt Olimski, a junior from San Diego, made 23 saves across the two games.

Michael Binni, a sophomore from Canonsburg, won twice by technical fall at the Washington and Jefferson Invitational. He wrestles in the 125-pound weight class. Jatin Chaudhary, a freshman from Hoshiarpur, India, won by pin and forfeit in the 197-pound class.

Natalie Denny, a sophomore from Harborcreek, led the Lions on the first day of the Redhawk Rally. She bowled a 186 against Daemen.