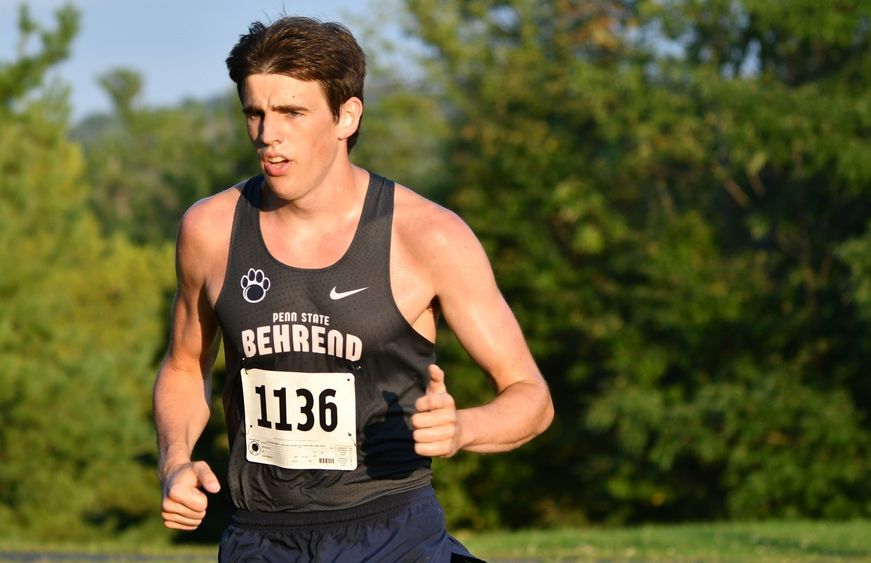 Phoenix Myers, a senior from Erie, won the 8K race at the Penn State Behrend Invitational, finishing in 27:12.3.

Penn State Behrend’s cross country teams won the Behrend Invitational on Sept. 17, defeating teams from Alfred and Westminster. The men took the top four spots in the 8K race. The women, running a 6K, placed six runners in the top 10.

Scores and highlights from the week:

First (of three teams) at the Penn State Behrend Invitational

First (of two teams) at the Penn State Behrend Invitational

Olivia Nola, a freshman from Erie, Pennsylvania, who is attending Penn State Behrend, placed second in the 6K race, finishing in 25:57.1

Goalkeeper Sam York, a junior from Akron, Ohio, made six saves against Grove City. He added five more against Mt. Aloysius, earning his fourth win of the season.

The Lions outshot Mt. Aloysius 23-5. Brenna McGuire, a senior from McDonald, Pennsylvania, scored the game-winner against Mt. Union with a low shot to the left corner in the game’s 78th minute.

The Lions scored 17 service aces against Brooklyn – the second-highest number of the season. Maddie Clapper, a graduate student from Hollidaysburg, Pennsylvania, had 30 digs against Grove City, including nine in the second set.

Third (of nine teams) at the Mountain Valley Collegiate Classic

Alex Pol, a senior from Erie, led the Lions on both days of the two-day tournament, carding a 76 and a 74. He tied for fifth overall, in a field of 60 golfers.

Jonathon Laier, a freshman from Lansing, Michigan, and Mitchell May, a junior from Erie, Pennsylvania, won a tiebreaker at No. 1 doubles, finishing 8-7 (7-4). May also won at No. 2 singles.

Erica Jasinski, a junior, and Audra Carnes, a sophomore, both from Fairview, Pennsylvania, won at No. 1 doubles against Pitt-Greensburg, finishing 8-6. Jasinski won at No. 1 singles against La Roche, finishing with scores of 6-1, 6-3.