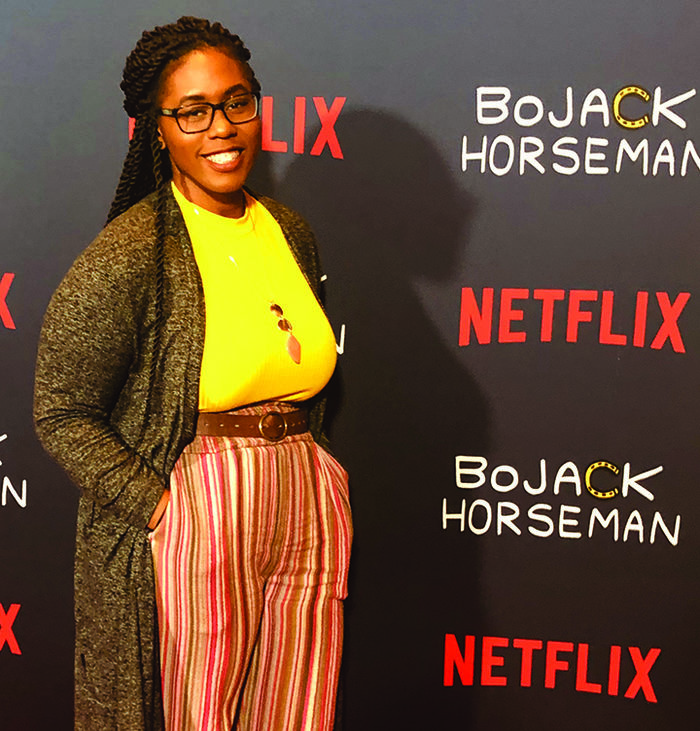 Chikodili Agwuna was a script coordinator for BoJack Horseman.

Chikodili Agwuna wanted to be a writer from the time she was in elementary school, but it was in a fiction writing class at Penn State Behrend that she learned what kind of writer she wanted to be. “I had written a short story about a very sad topic, but the writing was pretty funny,” said Agwuna, a 2015 Creative Writing alumna. “My classmates talked about how visual it was, and I realized that whenever I wrote a story, I’d imagine it as a movie. That’s when I decided to make screenwriting my goal.” She started reading scripts and watching shows, taking note of how stories evolved from page to screen. After graduation, she moved to L.A. and got her first job as a production assistant on a television pilot. From there, she progressed from showrunner’s assistant to writer’s assistant to script coordinator, working on a variety of shows, including BoJack Horseman, Tuca & Bertie, Yellow, and A League of Their Own. She was recently hired as a staff writer on Criminal Minds.

Carmen Cole, a 2002 English graduate and an information sciences and business liaison librarian at University Park since 2016, was recently promoted to associate librarian. In a 2019 story in the Daily Collegian, Cole said libraries were “a very influential place in my life, a type of home base which, no matter my financial or geographic position, offered a place to access many different things.” In 2018, Cole, who has a master of fine arts in creative writing from Bowling Green State University and a master of library science from Clarion University of Pennsylvania, founded Code for Her, an initiative to help Penn State women and gender-diverse individuals learn how to code. Though the program ended in 2020, she hopes to revive it. “It was a great two years of running the program and a lot of people participated, including students, faculty, and staff,” Cole said. “I would like to host it again in the future if I can find a volunteer to teach it.”

Tommy Phillips, a 2007 Communication and Media Studies graduate, wrote Penn State Bowl Games: A Complete History, which was published by McFarland Publishing. With play-by-play coverage of every Nittany Lion bowl game, the book chronicles Penn State football history dating back to the 1923 Rose Bowl. The book is available in print or as an e-book on Amazon and through various other outlets.

Behrend alumna Crystal Velasquez, who graduated in 1997 with dual degrees in English and Creative Writing, is writing her next series of children’s books. Inspired by Danny & Ron’s Rescue, the South Carolina nonprofit organization depicted in the documentary Life in the Doghouse, the first two titles, Elmer and the Talent Show and Moose and the Smelly Sneakers, were released by Simon & Schuster in February. Velasquez is an editor at Working Partners, a book packager specializing in children’s books. She is also a freelance proofreader and copy editor.

Tesha Nesbit, a 1993 Communication graduate, was named the first recipient of the newly created Behrend Distinguished Alumni Achievement Award. Nesbit, an entrepreneur and leader on issues of diversity and inclusion, is the director of diversity, equity, and inclusion and social responsibility for North American Partners in Anesthesia LLC. Nesbit was honored for her contributions to her profession, the community and the college. She was presented with the award last October.

Danielle Cook, a 2010 Behrend Psychology graduate, was named superintendent of the Randolph Academy Union Free School District in Randolph, New York, which works to educate and empower children in grades K-12 who have emotional and mental health disabilities. After Behrend, Cook earned a master of education from Edinboro University of Pennsylvania. She resides in Warren, Pennsylvania, with her husband and three children.

Adell Coleman, a 2009 Communication graduate, recently won two New York Festival Radio Awards for “Say Their Name,” a podcast that she directs and co-hosts. The podcast won a silver award for Narrative/Documentary Podcast and a bronze for Social Justice Podcast. Coleman is chief operating officer for DCP Entertainment.

“Surreal” is how Josh Sige described one of his first days on the job earlier this year as a videographer and content creator for the New Orleans Saints NFL football team. “I was standing around the Superdome at a home game, and I turned and Sean Payton (former Saints head coach) is standing next to me,” he said. “That’s when I realized I had made it to the big leagues.” Sige got there fast, having graduated from Behrend in 2021 with a degree in Digital Media, Arts, and Technology. It wasn’t luck. He had worked for it, moving steadily—albeit quickly—up the ranks in the sports world, poised with a camera on a lot of sidelines, from developmental leagues to WNBA (Seattle Storm) to his current position, which also includes working for the New Orleans Pelicans NBA basketball team.