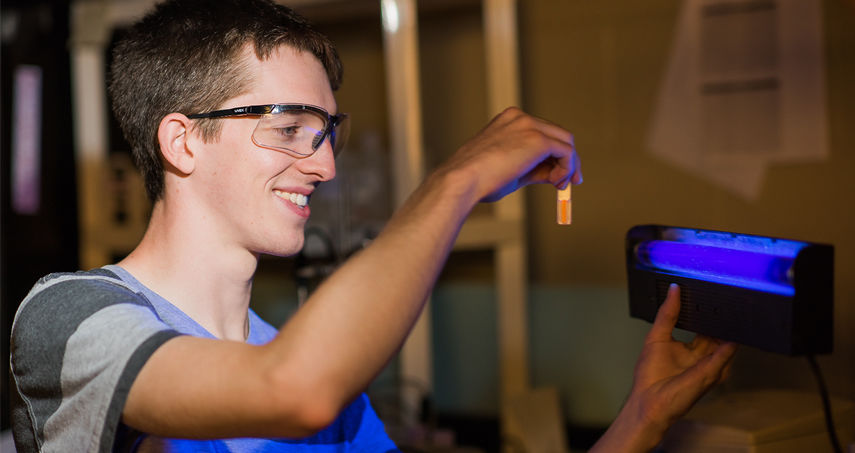 While many people agonize over choosing the right career path, Ian Campbell found his early, as a freshman in high school.

“That’s when I had my first chemistry class,” he said. “I excelled at it, and I really enjoyed it. I knew then that I was going to major in chemistry or materials science.”

Eight years later, he is on track to graduate in the spring with a degree in Chemistry and a minor in Physics. He’ll also have two other impressive resume highlights—a study-abroad semester spent in Ireland and paid undergraduate research experience.

The Schreyer Honors College scholar is one of six students—three Chemistry majors and three Physics majors—who have been working with Dr. Bruce Wittmershaus, associate professor of physics, in his quest to find a stable fluorescent material that will allow for cost-effective solar energy collection.

Campbell, who received a $3,500 Erickson Discovery Grant from the University to work on the project, spent his summer preparing, testing, and optimizing strands of DNA and silver nanoclusters to find the combination that Wittmershaus hopes will result in cheaper solar energy.

“DNA is pretty easily mass produced and we use a very small quantity of silver, which is easily recycled, so it’s fairly inexpensive technology,” Campbell said.

Campbell wrapped up his portion of the project before leaving for Ireland in August.

“I thought study-abroad was a great opportunity,” he said. “What other time in my life could I leave for four months to live in another country and come back and get right back into the swing of things?”

One of the things he hopes to swing back into? The lab.

“Ideally, I’d like to get a paper accepted before grad school,” he said. “Undergraduate work is rare, and even more so if it’s something considered publishable.”

Campbell, who plans to be a researcher in material science (glass, ceramics, energy, etc.), isn’t the only scientist in the family. His father, Dr. Michael Campbell, is a professor of biology and the assistant director of the School of Science. His brother, Alexander, is in the genetics graduate program at University Park.  (His mother, Martha, is the graphic designer for the college.)

He offers this advice to new student researchers: Don’t be scared or nervous.

“Just jump right in the deep end,” he said. “The only way you will become comfortable with anything is practice and exposure.”