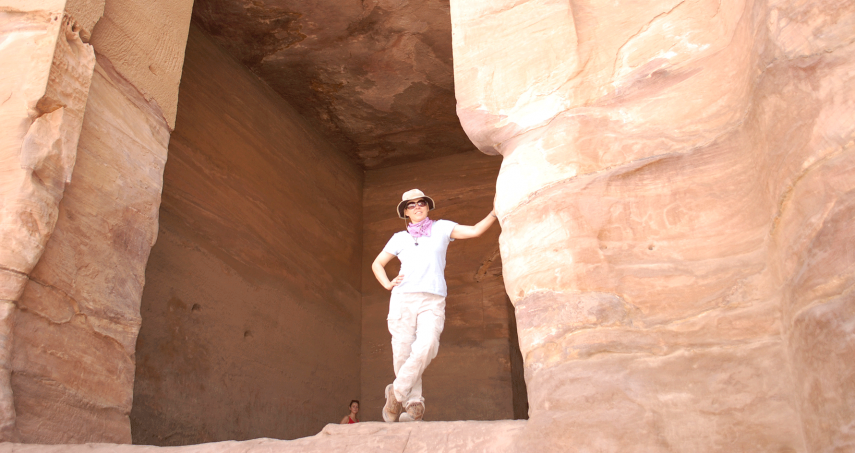 An old stack of National Geographics, with their full-color, fold-out maps, led Leigh-Ann Bedal to Petra, the ancient city buried in the Jordanian desert.

“I would study them,” says Bedal, now an associate professor of anthropology at Penn State Behrend. “I would imagine what life in those places was like.”

In high school, using money from her babysitting fund, she traveled to Europe and the Mediterranean. In college, she spent a year in Jerusalem. As a graduate student, she worked on excavations in Nineveh, in northern Iraq; Tell Ahmar, in Syria; and Jordan, home to the ancient Nabataean capital of Petra, which was first mapped in 1921.

For four years, she helped excavate Petra’s Great Temple, which had been destroyed by an earthquake in 363 A.D. Then, for her dissertation, she began a survey of the “Lower Market,” a flat shelf east of the temple. The site was a mystery; it lacked the dramatic scale of the temple or “the Treasury,” a two-story façade cut into the face of a sandstone cliff, which was a backdrop for a crucial scene in “Indiana Jones and the Last Crusade.”

Working with Bedoul tribesmen, clearing earth with shovels, brushes and buckets, Bedal uncovered evidence of a rectangular pedestal – a sandstone foundation bonded with white mortar, more than two meters high – and a complex irrigation system: channels, ceramic pipelines, a cistern and a castellum, which filtered water. The “Lower Market,” she determined, was actually a garden terrace with a monumental pool.

Petra was built on the Nabataeans’ ability to channel, pressurize, purify and pot water. Springs fed into pipes – tapered at the ends for a snugger fit – and emptied into hundreds of underground cisterns, ensuring a reliable supply of drinking and bathing water, regardless of the season.

“The Nabataeans were known for their skill with hydraulics, and for the ways they exploited scarce resources in a desert environment,” Bedal says. “There are channels everywhere, cut into the rock, or in ceramic pipes. But they didn’t just bring water to the site. They also diverted it in places, to protect what had been built from damage from flash floods.”

The garden, a royal paradeisos, is a showy example, even by Nabataean standards. The pool is more than 140 feet wide, with an island pavilion, decorative tiles, molding and a large garden terrace – the only known example of a Nabataean garden. In her dissertation, Bedal called it “a gratuitous display of conspicuous consumption.”

Bedal discovered the pool in 1998. She has continued to work at the site, uncovering more of the structure and its water system, and has brought in archeological botanists and garden experts and ceramicists from Cornell University, the University of Minnesota, the University of North Carolina and Hashemite University in Jordan. As site director for the Petra Garden Field School, a partnership with the State University of New York’s College at Brockport, she leads a four-week course that teaches students to excavate, document and analyze an archeological site. More than 50 students, including eight from Penn State Behrend, have participated in the work, which has been featured on NOVA and the National Geographic channel.

“That trip completely altered the course of my life,” says Mathew Peters, who went in 2004. Using triangulation, he methodically excavated a trench, looking for fossilized plant seeds. He found part of the pool’s filtration system.

“I remember waking up to the call of prayer and having breakfast at a table full of academics,” says Peters, who completed his degree in History at Penn State in 2006. “They treated me as part of the team, with respect and a shared passion for the profession. They didn’t condescend. That had a lasting effect on me.”

Students at the field school wash pottery and record the stratification of excavation trenches. They learn the technique of archeological flotation, bubbling water through a soil sample to isolate seeds and bone fragments.

The team lives and eats with a Bedoul family during the dig season, which typically begins in May. Peters wrote the names of his hosts – Haroun, Bedria, Fatima and Ali – in his journal. He wanted to remember them.

“They are amazing people, so friendly and inherently welcoming,” says Lindsay Hilldorfer, who attended the field school in 2011. She graduated from Penn State Behrend with a degree in Biology in 2012. “It’s obvious when you walk down the street that you aren’t from there. But when they approach you and you say, ‘American,’ they say, ‘Welcome, welcome.’ And they mean it. It’s part of their culture to show hospitality.”

Petra is a popular tourist destination, and the archeological park is guarded, due to its designation as a UNESCO World Heritage site. The rise of the Islamic State and the subsequent destruction of monuments in Nimrud, Mosul and Hatra, in northern Iraq, have had a chilling effect, however. Applications to the field school have fallen, and Bedal had to cancel this year’s dig season.

“It was the right decision,” she says, “but I regret not being there. We still have a lot of earth to clear.”

She hopes to lead a new team to Petra in 2017. She and her students will dig in the mornings, before the desert sun begins to take its toll. Trench shifts begin at 6 a.m.

“I love it there in the morning,” Bedal says. “It’s quiet, and quite peaceful. You just hear the chink of the hand picks, and maybe the braying of a donkey. You can focus, and you lose yourself in the work.”