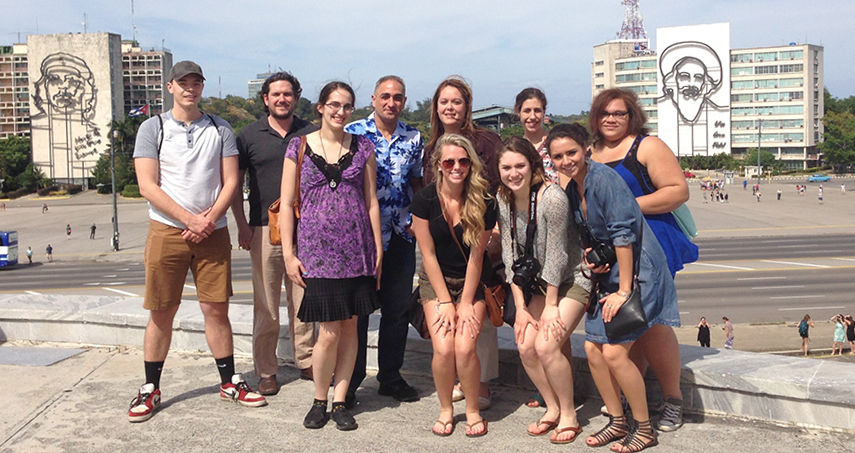 In Cuba, with the sanctions lifting and the border opening and big business rushing in – Hello, Netflix! – a trip to the beach can be socioeconomic reconnaissance.

“We knew it would be different," said Mariah Knott, one of eight Penn State Behrend students who traveled to Havana this year. “They have free housing, free health care and free education, but they often don’t have access to the most basic things, including transportation. I had no idea that people lived like that.”

The student group, led by Jessica Piney, lecturer in Spanish, spent half a day at Varadero, a resort town on Cuba’s northern coast. They stayed at the Roc Arenas Doradas Hotel, where the housekeepers roll the bath towels into the shape of origami swans.

Their translator had not been to that beach, which was crowded with Canadians. He had never before slept in a hotel.

“Cuba is supposed to be a classless society,” Piney said. “There are very clear class differences, however. I wanted our students to see that, and to understand what life in Cuba is really like. Not just politically, which is what we talk about in the United States, but also culturally and historically. There is a great deal more to the story.”

The United States cut ties with Cuba in 1962, restricting travel, trade and banking between the two nations. The embargo, though still intact, has loosened over the last year, as President Barack Obama lifted certain remittance and travel restrictions.

Obama visited Cuba in March – the first sitting U.S. president to do so since Calvin Coolidge traveled to Havana in 1928. [A Penn State Behrend student stands near an old car in Cuba.]

Piney’s group arrived two weeks before Obama. The students participated in workshops at the Center for Marti Studies, exploring Cuban poetry and history as well as Cuban-U.S. relations. They visited Revolution Square, Colonial Havana and Finca Vigia, where Ernest Hemingway lived. They walked through “Fusterlandia,” a community art project that has decorated more than 50 homes with bright, ceramic mosaics. It looked like something from “Alice in Wonderland.”

In that setting, seeing international brands was even more jarring. Knott passed Cubans in Converse high-tops and New York Yankees caps. On the tour bus, the radio played a Justin Bieber song.

Each group experienced a nation in transition, adapting to new cultural and economic influences. Each would see a very different Cuba if they visit again in 2017, as Piney, who also traveled to the island on academic visas in 2007 and 2008, hopes to do.

“It’s a tremendous opportunity to see Cuba at this point in its history,” she said. “So much is changing so quickly that it can be disorienting. That can be a good thing. That uncertainty makes you look more closely at why things are changing, and what those changes mean.

“Cuba isn’t an artifact,” she said. “It’s a vibrant, living culture. I didn’t want our students to have a glass-case experience there. I wanted them to see and hear and feel it, and to be part of it.”