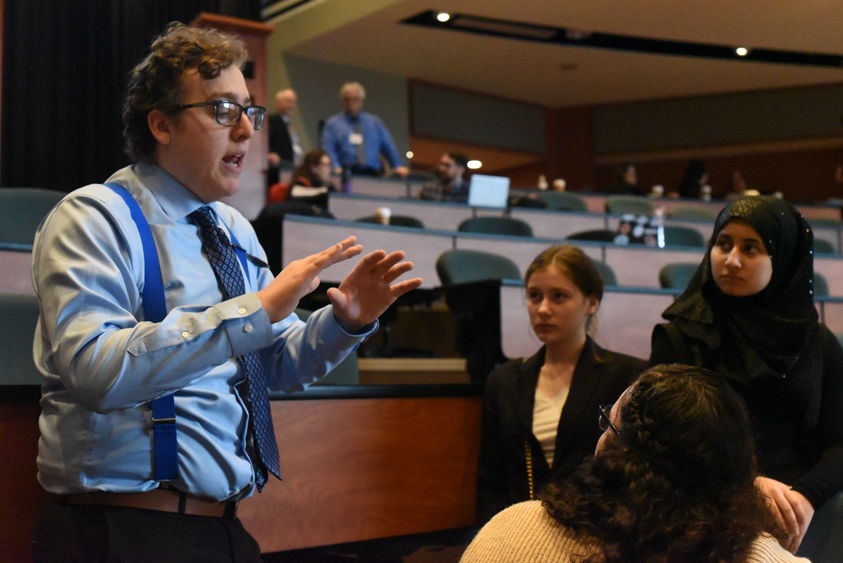 According to Ricardo Rodriguez, the educational simulation also builds something else.

“It really builds empathy because you have to put yourself in the shoes of the other delegates,” said Rodriguez, a senior industrial engineering major and president of Penn State Behrend’s Model UN Club. “That is so key for young people, too, as they head to college and eventually move into their careers.”

“We are very pleased with the turnout for our second conference,” said Lena Surzhko-Harned, an assistant teaching professor of political science and faculty adviser of the Model UN Club. “We had more high schools join us this year and we hope that the event’s success will attract even more participants in the future.”

During the conference, delegates were charged with debating the topic of “Improving Coordination in Preventing and Combating Migrant Smuggling.” The theme came directly from the United Nations’ Economic and Social Council, and it led to several heated discussions.

“Every five seconds, there has been someone either agreeing or disagreeing,” said Dylan Throop, a sophomore at General McLane High School who represented Kenya at the event. “You’ll also have countries that go off on tangents. Iran and Saudi Arabia have been arguing about nuclear power, and we’re all like, ‘This is not what this is about.’”

One challenge during the conference was that student delegates often had to take on the identity of a country and a position they might not personally agree with. This was by design.

“We wanted a topical theme like this, and we also knew it would force students to put themselves in a different position from what they actually might think,” said Marissa Litzenberg, a sophomore political science major and member of the Behrend Model UN Club.

Attendees proved up to the challenge.

“Once you get enough background information, you can make a strong argument for any country, even if you personally do not agree,” said Megan Guthrie, a senior at General McLane High School. “That’s also one of the nice things about this. We always hear how kids our age are not focused on the news, but then you come here and see so many people are informed and care, and that’s pretty inspiring.”

Helping to inspire high school students is one of the reasons Penn State Behrend’s Model UN Club hosts the conference. In the past year, the club has won a number of awards. In February, club members competed at the International Model NATO Conference in Washington, D.C., and won the awards of Outstanding Delegation on the North Atlantic Council, Distinguished Delegation in the Partnerships and Cooperative Securities Committee and overall Superior School Delegation.

The Behrend Model UN Club is reaping the benefits from participating in Model UN, and they hope that high school students will see the value in the activity and follow suit.

“When we won those awards, that was one of the best feelings because we not only hung with some really big schools, we beat them,” Litzenberg said. “Really, though, the benefits of Model UN go far beyond awards. This has done so much for me with regard to my confidence and being able to think on my feet. These are things that you can use in the workforce, regardless of what you do.”