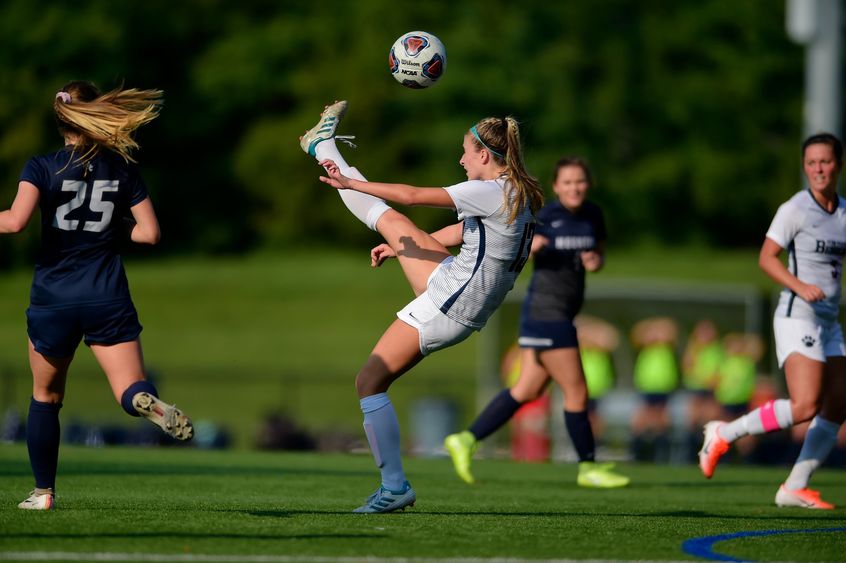 The Penn State Behrend women's soccer team beat D'Youville with a goal in the 103rd minute.

ERIE, Pa. — Brenna McGuire, a sophomore from McDonald, scored off the back of her foot in the second overtime against D’Youville. It was her second goal of the game.

The college’s golf, volleyball, cross-country and tennis teams also were in action last week. Here are the highlights:

The Lions have an 11-0 record and are ranked 10th in the nation. Three different players scored against Franciscan.

The Lions outshot D’Youville, 38-3, including eight shots in overtime.

First (of 10 teams) at the James Bowen Fall Invitational

Ryan Meyer, a freshman from Sewickley, placed second after a playoff at the Lawrence Park Golf Club. He carded a 75.

Jake Lehotsky, a junior from Erie, ran the fastest time for the Lions. He finished the 8K race in 26:43.6.

Riley Crissman, a senior from Bradford, ran the fastest time for the Lions. She finished the 5K race in 21:56.4.

Dani Kosslow, a sophomore from Pittsburgh, scored a career-high eight service aces against Medaille at the Marymount Invitational. Madison Clapper, a junior from Hollidaysburg, had 32 digs against DeSales. She was named to the all-tournament team.

Marissa Bowles, a junior from South Orange, New Jersey, and Jada Donatien, a sophomore from Brooklyn, New York, won at No. 1 doubles against both D’Youville and Thiel. Bowles also won at No. 1 singles against Thiel.