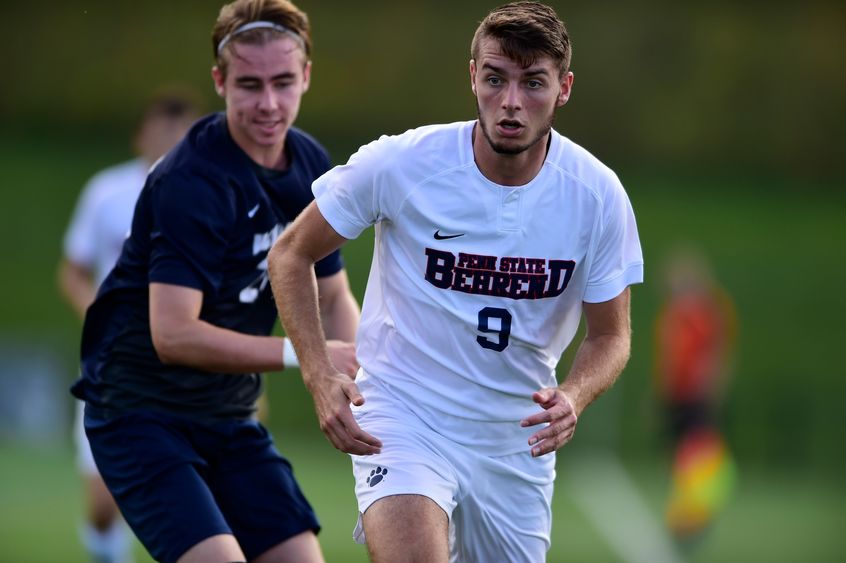 Richard Blanchard, a junior from Erie, scored his first collegiate hat trick in an Oct. 12 win over Penn State Altoona.

ERIE, Pa. – A single goal by Medaille – on the team’s only shot of the game – snapped an 11-game winning streak for the Penn State Behrend men's soccer team. The Lions responded with 11 goals in their next two games.

The college’s golf, volleyball, tennis, swimming and bowling teams also were in action last week. Here are the highlights:

The Lions had three golfers in the top 10 at Avalon Lakes Golf and Country Club. Garrett Schlick, a senior from Harmony, led the team with a two-day score of 159.

The Lions are undefeated in Allegheny Mountain Collegiate Conference play. Kristin Reiland, a sophomore from Fairview, led the team against Hilbert with eight kills, six aces and six digs.

Emma Martin, a freshman from Mars, earned the lone win against Washington & Jefferson. She competed at No. 6 singles.

Fourth (of five teams) at the Grove City Fall Classic

Chase Bietz, a sophomore from Clearfield, won the 100 breaststroke, finishing in 59.29. Quinn Fischer, a senior from Fairview, won the 500 freestyle, finishing in 4:58.60. He beat the field by nearly seven seconds.

Fifth (of five teams) at the Grove City Fall Classic

Seventh (of eight teams) at the Grapevine Classic

Brianna Lundy, a senior from North Huntingdon, finished the two-day tournament ranked second in a field of 60 bowlers. Her average score was 185.60.