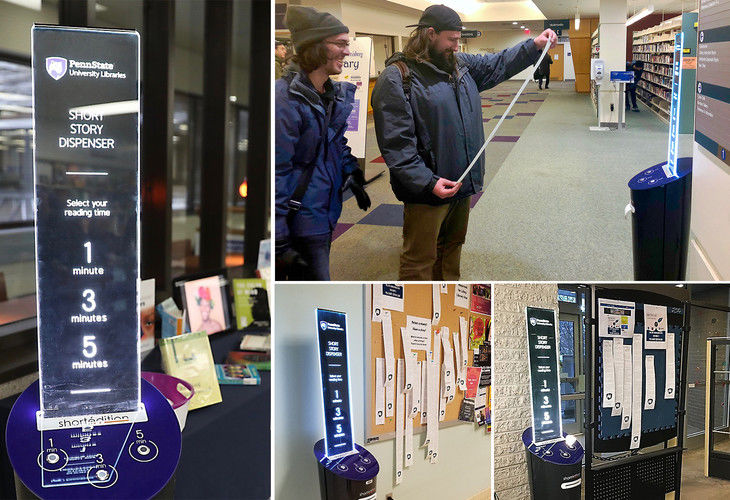 "I think the submissions for the contest were some of the most unique and creative that we have seen yet! They were a pleasure to judge," said Sarah Williams, a Penn State University Park student and member of the all-student Editorial Board.

Each of the four Libraries Short Stories Editorial Board winners and the People’s Choice winner will receive a $100 Visa gift card. All winning stories, including honorable mentions, will be added to the Libraries’ Short Edition short story dispensers, located around the University Park campus and six campus libraries, and at Schlow Centre Region Library.

The People’s Choice winner, “Breakfast with Souls,“ received the most online reader votes via the Libraries Short Stories website during the contest. Its author, Kelsey Cramer, is a marketing and management student at Penn State’s Abington campus.

The Libraries Short Stories Editorial Board winners, chosen by the all-student editorial team and listed alphabetically by title, are:

Honorable mentions, chosen by the all-student editorial team and listed alphabetically by title, are:

To read all entries from the fall 2019 contest as well as past contest submissions, visit the Libraries Short Stories website at http://psu.short-edition.com.

Anyone with a Penn State email address and anyone from Centre County, Pennsylvania, can sign up for an account to submit original creative works to the site, and can vote for and also leave reader comments on other writers’ stories. Centre County writers not affiliated with Penn State will have their work considered for distribution from Schlow Centre Region Library’s Short Edition short-story dispenser, and some will have their work added to the University Libraries’ nine other short-story dispensers, along with other previous contest winners.