Use these links to jump to a specific item below.

Faculty members in Penn State Behrend’s bachelor of fine arts (B.F.A.) in creative writing program are collaborating both in the program and on the page: All three have new books in print, and each lists the others on the acknowledgments pages of their books.

“One of the great things about our creative writing program is the real sense of community among the students and the three of us,” said Dr. Tom Noyes, professor of creative writing and English and chair of the program. “We are good friends as well as colleagues, and we share our work a lot.”

The new home for the Susan Hirt Hagen Center for Community Outreach, Research, and Evaluation (CORE).

Construction is well underway on a $6.3 million renovation and expansion of Penn State Behrend’s historic Federal House to provide a new home for the Susan Hirt Hagen Center for Community Outreach, Research, and Evaluation (CORE). The facility, which will allow CORE to expand its school-focused and community programs for area youth, is on track to be completed late this year. 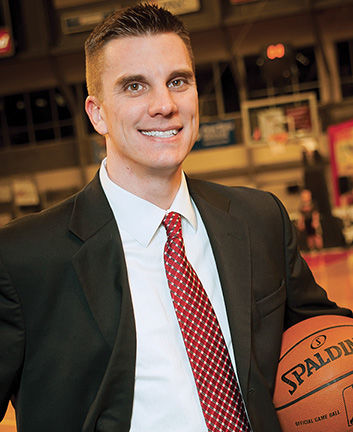 Matt Bresee, was recently recognized as the NBA G LeagueTeam Executive of the Year.

Matt Bresee, a 2000 Communication graduate and former president of the Erie BayHawks, was recently recognized as the NBA G League Team Executive of the Year. The award is voted on by the league’s team presidents.

“This recognition is a reflection of the thirteen years of great support we got from fans, sponsors, media, front office staff, coaches, players, and other partners,” Breese said. “It was a collective effort of so many, and I was fortunate to be part of it. The past year has been tough and being recognized by my peers is humbling.”

Bresee became president of the BayHawks in 2009, after serving on the staff for a number of years. The BayHawks ceased operations this year after being unable to identify another NBA partner to keep the league in Erie. Bresee now works in business development for the LECOM Institute for Successful Aging in Erie.

(Re)visit the Gorge From Home

Wintergreen Gorge is one of Penn State Behrend’s greatest assets. Many alumni have fond memories of time spent there running, hiking, and biking on the trails and under the leafy canopy along Fourmile Creek.

Thanks to Marcus Jacobs, a senior Business Economics and International Business major, anyone can now tour the gorge without leaving home. Jacobs, working through the college’s Virtual/Augmented Reality (VAR) Lab, developed a virtual tour from a variety of starting points, including the trail overlook known as Devil’s Backbone. Jacobs also included a few other campus favorites—Wilson Picnic Grove and the Lion Shrine—as stops on the tour.

The Wintergreen Gorge virtual tour is just one of several virtual tours that the VAR Lab is currently developing.

While browsing the British news and media website The Guardian, Dr. Amy Carney, associate professor of history, was shocked to see the headline “Nearly two-thirds of U.S. Young Adults Unaware 6M Jews Killed in the Holocaust.”

“To say that this headline stunned me would be an understatement,” said Car­ney, who then investigated the source on which the article was based: A survey con­ducted by the Jewish Claims Conference.

As an educator who specializes in modern German history, specifically the Third Reich, Carney regularly teaches students, as well as the larger com­munity, about the Holocaust.

“But after reading the results of this survey, which included information specific to Pennsylvania, my desire to help our students understand how and why it happened doubled,” she said.

Carney is launching a Holocaust aware­ness effort with a series of programs, including talks with Holocaust survivors and scholars as well as museum visits and movie screenings to be conducted as part of the University’s Schreyer Honors College Distinguished Faculty program. Though she is still developing the frame­work, Carney hopes to have a virtual component to most of the programs to make them accessible to all Penn State students, faculty, staff, and others.

“Through these programs, my goal is to ensure that scholars and students, as well as members of the community, are better informed about one of the most significant events in modern world history,” she said. “I also believe this engagement will help attendees gain a stronger awareness of the past and present consequences of anti-Semitism and other forms of prejudice.” 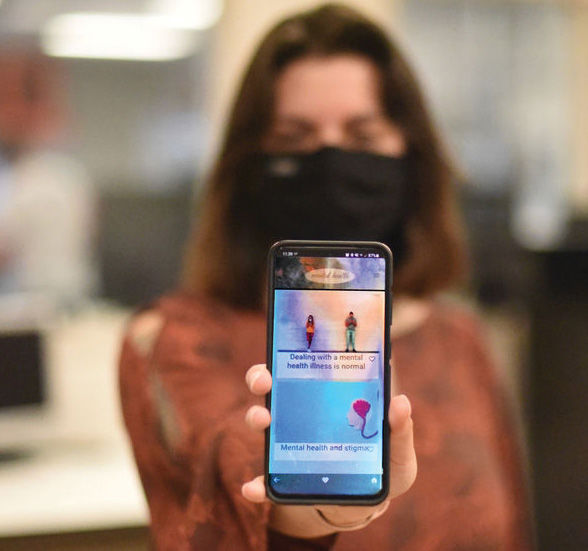 A team of Penn State Behrend students has developed a mental health and mindfulness app called Serene that helps users track their emotions.

A team of Penn State Behrend students has developed a mental health and mindfulness app that helps users track their emotions and suggests activities and resources to ease stress and depression.

“When people are in distress, it can be difficult to think clearly,” said Antigoni Kotsiou, who developed much of the app’s content, “so we made it simple: Try a new recipe. Take a walk in a different neighborhood. Call your grandparents.”

Kotsiou, who graduated from Behrend’s Master of Applied Clinical Psychology program this past December, created the content in collaboration with Dr. Christopher Shelton, assistant professor of clinical psychology and director of the college’s Virtual/Augmented Reality (VAR) Lab. Marc Maromonte, a Computer Science major who graduated in May, handled the coding, and Erica Juriasingani, who also graduated in May with a degree in Psychology and a certificate in Human Factors, led the user-experience research and design with Dr. Lisa Jo Elliott, assistant teaching professor of psychology.