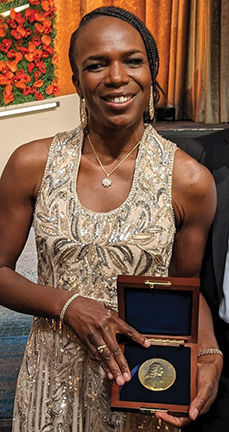 Alumna one of CNN’s top 10 heroes

Dr. Ala Stanford, a Philadelphia-based surgeon and founder of the Black Doctors COVID-19 Consortium, was selected by CNN as one of its 2021 Top Ten Heroes.

Stanford, who began her Penn State studies at Behrend, was honored during the fifteenth annual "CNN Heroes: An All-Star Tribute," which aired live in December on CNN from New York City.

Stanford was introduced and praised for her work by Dr. Anthony S. Fauci, chief medical adviser to President Biden and director of the National Institute of Allergy and Infectious Diseases.

"The leading causes of death for all in the United States are heart disease, cancer, COVID-19 casualties, and trauma,” Stanford said in a news release, “all of which are preventable, but the neighborhoods where people live, work, play, and raise their children lack the care they need. Preventing illness and suffering is the greatest care and love we can offer our families/brothers/sisters/communities.

“Our mission is providing preventive care," she said. “Many Black residents and the poor have not been served, but now they are. Every person should be able to walk into a doctor’s office regardless of the color of their skin or insurance status and be seen with empathetic care, without bias and judgment.”

Stanford, who recently opened the Dr. Ala Stanford Center for Health Equity in North Philadelphia, was awarded $10,000 to advance the work of the Black Doctors COVID-19 Consortium.

Why did the amphibian cross the road? To lay eggs on the other side

The area around Penn State Behrend’s Advanced Manufactur­ing and Innovation Center (AMIC) in Knowledge Park is an amphibian’s paradise. Woods give way to marshy areas and small ponds, some tucked safely behind trees and shrubs, providing the perfect habitat for frogs, salamanders, and newts that live in woods but breed in water.

Each spring, a parade of am­phibians crosses Technology Drive and the AMIC parking lot to reach the ponds where they can lay their eggs. Many don’t make it, falling victim to vehicle traffic or plunging through the grates that cover road drainage tubes. Motorists passing by may not notice, but the faculty members and students in Behrend’s Biology program who study spotted salamanders do.

“Frankly, we’ve seen too many road-killed amphibians and egg-laden females stuck in the drains to not try to do something about it,” said Dr. Lynne Beaty, assistant professor of biology. “They’re not alone, though, as many wood frogs, red-spotted newts, and spring peepers also face those same hazards to reach breeding ponds in the spring.”

Beaty reached out to the college’s Maintenance and Operations (M&O) department with two solutions to mitigate the problem. One was to install “amphibian migration route” signs to encourage drivers to pay attention to amphibians on the asphalt. The second solution involves placing a mesh covering over the drains in the area to prevent small amphibians from falling through on their way to their breeding sites.

The signs, which were designed by senior Biology student Phoebe Will, are ready for installation, and a team of engineering students is working with M&O to create the mesh coverings for the drains.

“Our Maintenance and Operations group is always willing to help the college achieve its academic and research missions, especially when that involves protecting wildlife,” said Randy Geering, senior director of operations.

Other News
Dr. Michael Rutter, associate professor of statistics and asso­ciate director of the School of Science, was appointed co-chair of the Interdisciplinary Science and Business major.

The Penn State Behrend Sigma Xi Undergraduate Research and Creative Accomplishment Conference, scheduled for April, will be held in an in-person format, as will the Science Olympiad, a science competition for students in grades 6-12, which is scheduled for March.

In Memoriam
Dr. Donald “Don” McKinstry, associ­ate professor emeritus of biology, died January 30. He was a biology professor at Behrend from 1970 to 2004, teaching organismal biology and microbiology courses. 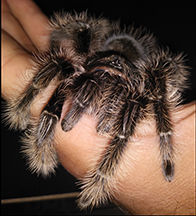 Two of the most frightening things known to humans—advanced math and tarantulas—are some of Dr. D.J. Galiffa's favorite things. The associate professor of mathematics owns thirteen tarantulas and says the highly venomous spiders make great pets.

"They are one of the cleanest and most fascinating animals," Galiffa said, as his Honduran curlyhair "Curly," a thirteen-year-old tarantula about the size of his palm, slowly walked over and around his hand. "Each spider has a unique personality."

We talked with Galiffa to learn more about tarantulas and how they can sometimes serve as teaching aids.

What is appealing to you about tarantulas?
They make great pets. They are clean, quiet, easy to care for, and they all have their own personalities. It is an exciting challenge to try and understand a species that is so far removed from humans. They communicate with their actions and behaviors.

What do they eat?
Worms, crickets, roaches. Basically, they eat anything alive that is smaller than they are. They only eat a few times a month.

What do you teach with your tarantulas?
There are many things we can teach with spiders—web strength and construction, genetics, population dynamics, gait analysis, and blood flow, which is quite fascinating in tarantulas since their blood flows through their entire body. They don't have veins like humans do.

How can you use them to teach math modeling?
We can model them as predators and as prey. We can also study the genetic probability of obtaining certain variations of a given species using probabilistic models. For example, there are three forms of Chilean rose tarantulas—the gray, red, and pink color forms. My spider, Rosalinda, is gray form and Charlotte is a red form. The students in my workshops do a basic version of this very type of modeling and then get to see the differences in the color forms in my actual tarantulas. 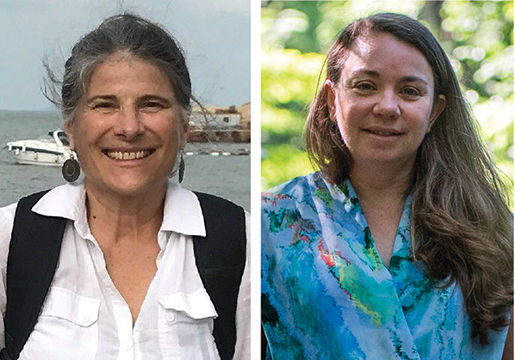 Two Behrend researchers were chosen to receive 2021 Great Lakes Leadership Awards for work that raises awareness of critical issues in the Great Lakes ecosystem. Each will receive $10,000 in funding to advance their research.

Allegra Cangelosi, a senior researcher, was selected for advancing ballast-water treatment on transoceanic ships, an environmental protection measure that has reduced the transfer of invasive species into the Great Lakes.

Dr. Sherri "Sam" Mason, Behrend's director of sustainability, was selected for her study of microplastics pollution in the Great Lakes, which has contributed to a decision by the Food and Drug Administration to ban plastic microbeads in face creams and shampoos.

Two Secondary Education in Math­ematics graduates were recognized in 2021 with Golden Apple Awards from WJET-TV in Erie. The awards honor outstanding teachers who are nominated by their students.

See video of the award presentations at yourerie.com/golden-apple-award. 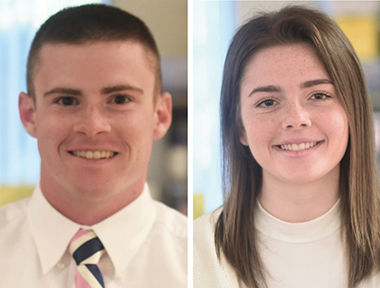 This year's Robert Noyce Teaching Scholarships have been awarded to Secondary Math Education majors Jacob Deitz and Dani Kosslow. Each will be eligible for up to $45,000 in financial aid.

Noyce scholarships are available to students pursuing dual majors in Mathematics and Secondary Education in Mathematics; students are eligible for up to two years of funding in exchange for a commitment to teach in a high-needs school district.